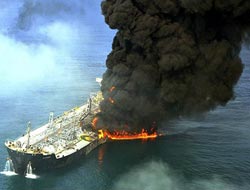 Two of the tanker's crew, who were rescued from the water, suffered minor injuries.

Two of the tanker's crew, who were rescued from the water, suffered minor injuries.

A tanker carrying some 30,000 metric tonnes (mt) of oil condensate caught fire on Tuesday after a collision with a container ship in a shipping channel off the coast of Dubai.

The Dubai-based port operator DP World said the blaze had been extinguished and that two of the tanker's crew, who were rescued from the water, suffered minor injuries.

There have been no detailed reports about damage to the ships, but a witness said the fire had extended from the waterline to the top of the tanker. Thick black smoke was seen billowing from a gash in the tanker's hull.

At one stage, the container ship too appeared to be on fire.

It is not clear if any of the tanker's cargo leaked into the sea.

Police helicopters and boats, together with the Emirates Coast Guard and the port's emergency response division, where at the scene, officials said.

The ships involved in the collision were moved from the shipping channel and traffic to and from the port was able to operate normally.

The Maltese-flagged tanker Kashmir was headed from Iran to the UAE. It is owned and managed by Italy's Martinoli Consulting Srl, and is operated by Petroships from Greece.

This news is a total 1909 time has been read