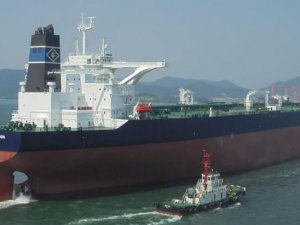 Two crew members on board a Euronav-owned Very Large Crude Carrier (VLCC) have died after apparently being struck by a large wave as the ship rounded Cape Horn on Saturday, September 11th.

Two crew members on board a Euronav-owned Very Large Crude Carrier (VLCC) have died after apparently being struck by a large wave as the ship rounded Cape Horn on Saturday, September 11th. The ship’s managers, Northern Marine Management, confirmed the incident in an emailed statement.

According to the company, the fully-laden MT Arafura was on passage from Brazil to Long Beach, California when it encountered adverse weather with large swells and waves.

Based on preliminary information, as the vessel rounded Cape Horn, the vessel’s Chief Officer and Bosun, both Indian Nationals, were attending to an alarm in the forward part of the vessel when they were struck be a large wave, killing them both. A full investigation will be conducted into the incident.

MT Arafura has subsequently altered its course to Valparaiso, Chile, where the bodies of the deceased seafarers are expected to be disembarked and repatriated.

Arrival is expected to arrive September 18th. “Following discussions with the Chilean Maritime Authorities it is hoped that some crew changes will be possible at the same time,” Northern Marine Management said in its statement.

MT Arafura is a 298,991 dwt, Belgian-flagged crude oil tanker that is 100% owned by the Belgian tanker company Euronav (NYSE: EURN).

The ship was built in 2016 and operates on the spot market. “Every sympathy and heartfelt condolences go out to the families from both Northern Marine Management and the vessel’s Owners, EURONAV,” the statement said.

“The safety and wellbeing of all of our colleagues at sea is our number one priority for both Owners and Managers and a full and thorough investigation into this incident will be carried out to establish the root cause, and any possible lessons to be learned.”

The statement also thanked the Chilean Maritime Authorities and MRCC for their professional and on-going support. Support was also being provided to the families of the victims.

Arafura previously went by the name ‘Gener8 Macedon’ before joining Euronav’s fleet through its acquisition of Gener8 Maritime in 2018.

This news is a total 1756 time has been read
Tags: Euronav , Two Crew On Euronav VLCC Killed , marine accident