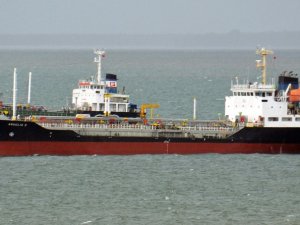 The fishing boat capsized after collision with tanker Angelia 2 in Banda sea off Bahodopi, Indonesia.

The fishing boat with three people on board crossed the course of the underway tanker, which caused collision and boat explosion. The tanker did not suffered serious damages and there was no immediate danger for her seaworthiness. The tanker’s crew started immediate rescue operation, but unfortunately two from the crew died during it. However, the seamen succeeded to rescue two of the fishermen, but one went missing. The circumstances around the accident are under investigation and not well clear. The local authorities started large-scale SAR for the missing fisherman.

The tanker was detained by the local authorities during the investigation. The accident happened in dense fog and highly reduced visibility. According to local authorities the boat maneuvered and laid of crossing course with the tanker. The duty officer of the cargo ship was unable to react and saw the boat in very last moment.

This news is a total 1014 time has been read
Tags: Two dead and one missing after fishing boat exploded in collision with tanker Angelia 2 in Banda sea