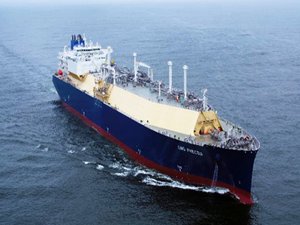 As a leader of China’s LNG transportation industry, COSCO Shipping has invested in, built, and operated 41 LNG vessels with an aggregate capacity of 6,943,600 m3.

Named after a star in the constellation Ursa Major, LNG Phecda is the sister vessel of LNG Dubhe and LNG Merak, delivered in November 2019 and January 2020, respectively by Hudong.

Despite the hurdles presented by the Covid-19 pandemic, MOL expects Hudong to deliver the vessel on schedule.

With a length of 295 m, beam of 45 m and draught of 11.5 m, LNG Phecda is equipped with two WinGD W6X72DF dual-fuel engines produced by CMD and will have a service speed of 19.5 knots. LNG Phecda is fitted with GTT NO96 LO3+ liquid cargo membrane tank system, which can reduce the daily evaporation rate by 33% compared to the traditional NO96 tank, significantly improving overall cost effectiveness.

The vessel will be managed by MOL LNG Transport (Europe) Ltd.