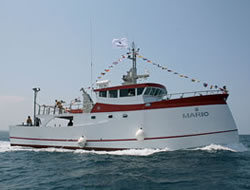 The fishing boats ?Mario? and ?Vincenzo I? are the latest vessels from designs by Samarelli Studio Navale based in Molfetta, near the southern Italian city of Bari. The keel structures of the vessels have been the main focus of the studio.

"Mario" represents a whole ?new concept?, as Samarelli himself said, as far as the Italian fishing vessel market is concerned. She has an ?inverted? bow, also known as a Norwegian bow, a feat enabling the boat to face particularly adverse seas.

The new design is aimed at limiting any energy loss, thus enhancing the vessel"s performance and also saving considerable amounts of combustible bunkers in the process. 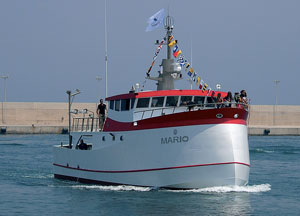 The inverted bow, following seven-months of operation, has been confirmed as a reliable technical feat, both in terms of stability and consumption. So much so in fact, that a twin unit is currently in the works.

"Mario", launched in July 2010, is equipped for boulter fishing and is mainly deployed in the Marsala area. She is built of iron, steel and marine plywood, is 19.9 metres long, 5.8 metres wide and 2.6 metres deep.

"Vincenzo I" is 28.7 metres long and was launched in October 2010. She has since been deployed in the San Benedetto del Tronto area, in the Adriatic. 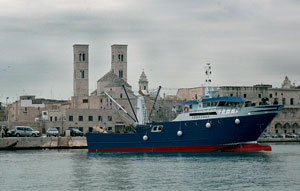 She is characterised by a peculiar bulb structure, capable of guaranteeing a great degree of stability at speeds up to 12.5 knots at 1,800RPM.

The vessel can carry up to 16 crewmembers, and is mainly deployed as a lamplight fisher. She is built in iron and steel and is seven metres wide, with a moulded depth of three metres.