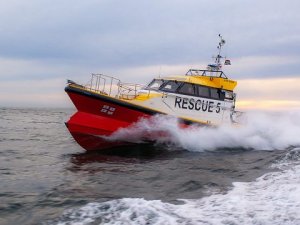 Two crew members have been evacuated from an unnamed containership off the South African coast, the National Sea Rescue Institute (NSRI) said.

On October 1, NSRI Table Bay duty crew were activated by the Transnet National Ports Authority (TNPA) following a request for a patient evacuation to hospital from the boxship approaching Table Bay.

One of the seafarers suffered an injury and another had a medical complaint, according to NSRI.

A rescue craft accompanied by rescue paramedics was launched upon received the request, NSRI added.

NSRI reached the ship 14 nautical miles offshore Table Bay in calm sea conditions and the crewmen were transferred onto the sea rescue craft.

Both patients have been transported to a local hospital and are in stable conditions, NSRI further said.

This news is a total 146 time has been read
Tags: Containership, Evacuation, NSRI, Seafarers. Cruise Ship Banned over Coronavirus Fears Arrives in CambodiaA cruise ship operated by Holland America Line has been allowed to dock in Cambodia after it was turned away from several other disembarkation ports over coronavirus fears. Diamond Princess Coronavirus Infection Count Rises to 135Some 135 people traveling on board Diamond Princess cruise ship have been infected with the novel coronavirus, the latest update from the Japanese Ministry of Health shows.