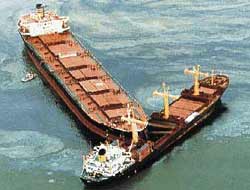 About 10.5 million crude oil leaked to waters off the western coast of South Korea on Friday after an oil tanker and a barge collided early on the day, the Korean Maritime Police said at a news release.

South Korea battled to contain the world's biggest oil spill in 4 1/2 years after a supertanker collided with a barge near Hyundai Oilbank Co.'s refinery on the nation's west coast.

The collision caused three holes on the ship's side and 10,500 metric tons (78,750 barrels) of crude oil was spilled, the Ministry of Maritime Affairs and Fisheries said in a statement today. The Hebei Spirit has stopped leaking and the slick is 7.4 kilometers (4.6 miles) long and 2 kilometers wide, it said.

Hebei Spirit is fitted with one hull, according to Lloyd's Register-Fairplay, which assigns ship-registration numbers. An international ban on such ships is due to start in 2010. Modern tankers are fitted with two hulls to cut the risk of an oil spill and are usually more expensive to hire.

South Korean oil companies are probably the world's ``biggest users'' of single-hull tankers, Per Mansson, a tanker broker at Nor Ocean Stockholm AB, said in an e-mailed note today. ``This might change policies in Korea and that would be tremendous for the market.''

The government will form a committee comprising oil-spill experts and seek help from residents of nearby regions to contain the slick, according to the statement. The vessel held 263,000 tons of crude oil and there were no casualties, it said.

The spill is the worst in South Korea's history and the biggest anywhere since the Tasman Spirit leaked about 27,000 tons of oil at the port of Karachi in Pakistan in July 2003, Tim Wadsworth, technical support manager for the International Tanker Owners Pollution Federation Ltd. in London, said by phone.

The oil leaked after a crane on the barge crashed into the Hebei Spirit at 7:15 a.m. local time, said Jeong Seong Mun, deputy director at the ministry's safety information center. The barge, owned by Samsung Heavy Industries Co., suffered minor damage, the ministry said in an earlier statement.

The leak is almost a third of the 37,000 tons spilled into Prince William Sound, Alaska, by the Exxon Valdez in 1989, according to data on the International Tanker Owners Pollution Federation's Web site.

Today's spill surpasses a 1995 accident in South Korean waters, when 5,000 tons of oil leaked at Yeosu, 455 kilometers south of Seoul. The country mobilized 166,905 people, 8,295 boats and 45 aircraft to contain the spill, which resulted in 9.6 billion won ($104 million) of economic losses, the ministry said in a statement.

The government has sent 30 patrol boats, 4 helicopters and 10 oil-spill control vessels to the site of the latest spill and is yet to assess its economic impact, said Lee Woo Sung, an official at the ministry.

The environment ministry is studying what damage the spill may have caused, Cho Gyu Won, an assistant director at the ministry's natural resources division, said from Gwacheon, near Seoul.

The tanker was carrying crude oil for Hyundai Oilbank's refinery at Daesan, Kim Sung Yong, a spokesman for the company, said by telephone. South Korea's fourth-biggest oil refiner may reduce processing at its 390,000 barrels-a-day Daesan plant following the spill, said company officials who asked not to be identified.

Hyundai Oilbank's Kim said the crude-oil processing rate at the refinery remains unchanged at about 80 percent of capacity. The company is using its stockpiles and will ask state-run Korea National Oil Corp. for an emergency supply, if needed, he said.

The very large crude carrier, or VLCC, capable of carrying more than 2 million barrels of oil, is registered to Hong Kong- based Hebei Ocean Shipping Co., according to data compiled by Bloomberg. A man who answered the phone at the company's office wouldn't comment and declined to identify himself.

Of the eight VLCCs listed on Hebei Ocean's Web site, at least six are fitted with a single hull, according to the Lloyd's Register-Fairplay database.

The accident led owners of double-hull tankers to raise prices for leasing the vessels by 15 percent compared with benchmark prices yesterday, Charlie Fowle, a director at London- based shipbroker Galbraith's Ltd., said by phone today.

Contracts called forward freight agreements that indicate the future cost of shipping oil jumped by as much as 8 percent, according to Ben Goggin, head of tanker FFAs at broker London- based SSY Futures Ltd. 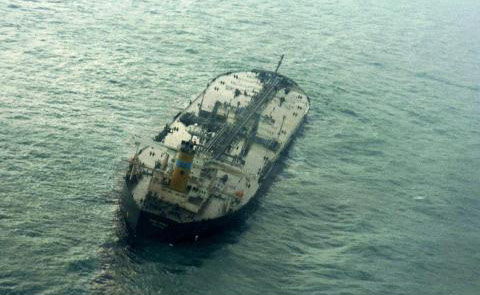 This news is a total 1048 time has been read