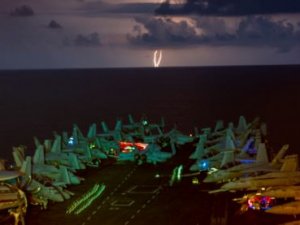 The aircraft carriers USS Nimitz and USS Ronald Reagan conducted a dual-carrier operation in the South China Sea on the Fourth of July, providing a counterpoint to the increased operational tempo of China's People's Liberation Army (Navy) in the region.

According to the U.S. Navy, the operation represents the U.S. commitment to "the right of all nations to fly, sail, and operate wherever international law allows."

"Back home we would celebrate the Fourth by launching fireworks,” said Yeoman 2nd Class Chareese Knox of USS Nimitz. “But nothing celebrates freedom like launching fighter jets from the middle of the ocean at night.”

Comprised of the Nimitz and Ronald Reagan Strike Groups, the "Carrier Strike Force" conducted several air defense exercises. “Doing the basic skills well, like efficient aircraft launch and recovery, is the foundation of all our tactics,” said Cmdr. Stanton Hanley, air operations officer, USS Ronald Reagan. “Maintaining our high operational tempo provides the training and repetitions necessary to ensure we can launch large scale strikes as a matter of routine.”

Military operations - including military aircraft launch and recovery - are not covered by UNLCOS' provisions for the right to pass through another nation's territorial seas ("innocent passage"). Aircraft operations are often considered a method to demonstrate objections to a coastal state's excessive territorial sea claims. China lays claim to the overwhelming majority of the South China Sea, including areas located hundreds of miles outside of its 12-nm line - and potentially including the area of operations for the dual carrier strike force.

China has upped the tempo of its naval exercises in the region, a pattern which Rear Adm. George M. Wikoff described as “counter-productive to efforts at easing tensions and maintaining stability" in an interview with the Wall Street Journal. Last week, Beijing announced a five-day drill in the vicinity of the disputed Paracel Islands, which are occupied by China and claimed by Vietnam.

"Xisha Islands [the Paracels] are indisputably China's inherent territory. China's military exercises in the seas off Xisha Islands are within our sovereignty and beyond reproach. The fundamental cause of instability in the South China Sea is the large-scale military activities and flexing of muscles by some non-regional country that lies tens of thousands of miles away," said Chinese Foreign Ministry spokesman Zhao Lijian at a press conference Friday.

This news is a total 1600 time has been read
Tags: Two U.S. Navy Carriers Send a Message in South China Sea