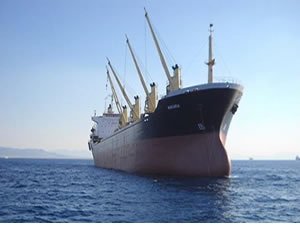 Two more Ukrainian commercial vessels with crews onboard have been seized by the Russian Navy in the northwestern part of the Black Sea amid Russia’s military attack on Ukraine.

Yesterday, after declaring a ‘counter-terrorist operation’ in the northwestern part of the Black Sea, Russian Navy ships captured two more Ukrainian civilian ships,” the Ministry of Internal Affairs of Ukraine said on 27 February.

The Ukraine-flagged bulk carriers in question are the 35,400 dwt Afina and the 28,200 dwt Princess Nicole.

They are owned by Russia’s Glorion SA and Ukraine’s Talliar Ltd, respectively, and commercially controlled by Ukraine’s Transship Co and Lebanon’s GMZ Ship Management, according to data provided by VesselsValue.

The 1983-built bulker Afina was captured in Romanian territorial waters by Russian warships, 22 miles from the Snake Island.

The 1984-built Princess Nicole was seized while en route to Constanta, Romania, and headed for Snake Island. They have nearly 50 seafarers on board and thousands of tons of diesel fuel and grain.

“Almost as soon as both civilian ships approached the Russian warships, the AIS was turned off and they stopped communicating,” the Ukrainian State Border Guard said. As of 28 February, the vessels’ AIS data show they are located in the Black Sea, near the occupied Crimea.

“Commanders and officers of the Russian Navy are once again defiantly violating the rules of international maritime law, under the guise of a self-proclaimed counter-terrorist operation,” the border guard noted.

It added that the day before, the Russian Navy ships seized the Sapfir search and rescue ship, which left for Snake Island with a humanitarian mission.