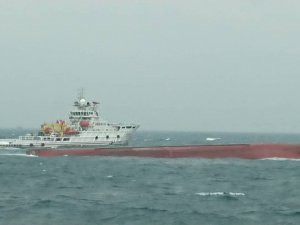 Thirteen seafarers were rescued and twelve are considered missing after two vessels capsized while transiting through the Taiwan Strait on October the 6th.

The Taiwanese JIA LIANG and DONG HONG gravel ships got caught in adverse weather conditions, with winds measuring at 8-9 Beaufort.

The Taiwanese National Rescue Command Centre received a distress call from the two vessels during the early hours of October the 6th.

They proceeded to contact the Taiwanese Coast Guard who dispatched a vessel from Penghu in order to assist with the Search & Rescue operation.

Chinese authorities also dispatched a number of vessels to the area, who were accompanied by a helicopter and a fixed-wing aircraft.

By the time the Coast Guard had arrived at the location, the Jia Liang had sunk, and the Dong Hong had capsized. Thankfully, they managed to rescue at least thirteen seafarers from the scene, but twelve are still considered missing.

Reportedly, the Taiwanese Coast Guard officers tapped on the hull of the capsized Dong Hong but received no response from within the vessel.

According to the Coast Guard, the two vessels were flat-bottomed river-class vessels that should not have been sailing at sea under any conditions.

Allegedly, the two vessels were involved in illegal sand trade.