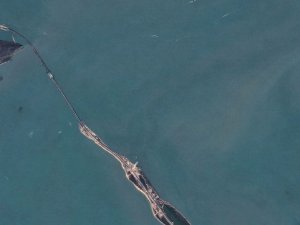 On Wednesday, the Trump administration accused Russia of harassing merchant shipping in the Sea of Azov and the Kerch Strait, and it called for a halt to the interference.

The narrow strait is a key transit route for Ukrainian vessels moving between ports on the Black Sea and the Sea of Azov, and Russia has bolstered its naval presence in the area, citing a need for security after the construction of the controversial Kerch Strait highway bridge. The bridge connects Russia's contiguous, recognized territory with Russian-occupied Crimea, which was seized from Ukraine by Russian-aligned forces in 2014.

Radio Free Europe reports that Russian authorities have detained nearly 150 passing merchant vessels - some on multiple occasions, and some for several days - since the bridge's highway span was completed in May. In a statement released Thursday, State Department spokesperson Heather Nauert confirmed that the interdictions were frequent and persistent. "Russia has delayed hundreds of commercial vessels since April and in recent weeks has stopped at least 16 commercial ships attempting to reach Ukrainian ports," said Nauert. "Russia’s actions to impede maritime transit are further examples of its ongoing campaign to undermine and destabilize Ukraine, as well as its disregard for international norms."

The inspections are part of a broader series of shipping disputes between Ukraine and Russia. In March, Ukraine's State Border Guard Service detained the Russian-flagged, Crimean-registered fishing vessel Nord in the Sea of Azov, and charged her captain with illegally entering occupied Crimea. The Ukrainian government has implemented a national ban on vessels and seafarers with records of making port calls in Crimea, and it asserts that these ports are closed under Ukrainian law. In response to the arrest, Russia's Federal Security Service (FSB) accused Ukraine of "hijacking" the Nord in an act of piracy. Russia's systematic inspections of passing merchant traffic have been described in the Russian press as a response to the Nord's seizure.

In addition to the inspections, the Kerch Strait Bridge itself serves as an effective deterrent to merchant shipping: the main span is only 33 meters in height, and the Ukrainian port of Mauripol says that dozens of vessels can no longer arrive because of the new air draft limit.

This news is a total 373 time has been read
Tags: U.S. Accuses Russia of Harassing Ukrainian Shipping