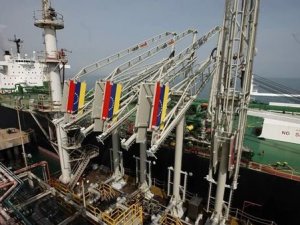 On Friday, the Trump administration introduced new sanctions on the Venezuelan government that will make it more difficult for state-run oil firm PDVSA to access foreign investment.

PDVSA is heavily in debt, and is in need of new funds to refinance its maturing bonds. Without access to American capital, the oil firm faces the prospect of default – or greater reliance on Chinese financiers.

PDVSA’s U.S. downstream subsidiary Citgo is exempt from these restrictions, but it will no longer be allowed to return dividends to its parent company. Citgo operates three refineries on the U.S. Gulf Coast, which handle about 10 percent of America’s oil imports. Congressional representatives from the districts where Citgo has major facilities have called on the administration to avoid interfering with the firm’s operations.

Other oil traders and refiners will not be directly affected by the sanctions, despite early warnings that the administration could attempt to interfere with the sale of lighter grades of American crude to Venezuela.

Venezuelan president Nicolas Maduro has moved to crack down on domestic dissent as a full-scale economic collapse has prompted widespread protests in Caracas and beyond. Maduro's administration recently won a ballot initiative to replace Venezuela's legislature with a new assembly, which is tasked with rewriting the nation's constitution to assign more power to the presidency. The Trump administration has warned that the move is a step towards dictatorship, and the new sanctions are designed to punish Maduro's government for its anti-democratic actions. “Maduro may no longer take advantage of the American financial system to facilitate the wholesale looting of the Venezuelan economy at the expense of the Venezuelan people,” U.S. Treasury Secretary Steven Mnuchin said in a statement Friday.

On Friday, PDVSA announced that it may partner with Chinese commodity firm Guangdong Zhenrong Energy to refurbish and operate its aging Isla refinery in Curacao. The government of Curacao has called for PDVSA to invest $1.5 billion in upgrading and modernizing the facility, but the Venezuelan firm has limited resources. Isla is over 100 years old, and it is showing its age: it suffered a major fire in May, which cut its output in half, and as of June it was still recovering slowly.

Guangdong Zhenrong has already signed a deal with Curacao to take over the refinery's operations in 2019, when PDVSA's lease expires. PDVSA does not prefer this option, and is in negotiations with Curacao to retain control of one of its biggest refining operations.

In June, PDVSA agreed to a deal with China National Petroleum Corporation (CNPC) to build a 400,000 bpd refinery in Jieyang, Guangdong province. The facility will be designed to handle Venezuelan heavy crude, and it should open in 2020. Along with this long-planned development, PDVSA says that it is in talks with China Development Bank for funding 700 smaller projects.

This news is a total 1054 time has been read
Tags: U.S. Announces New Sanctions on PDVSA