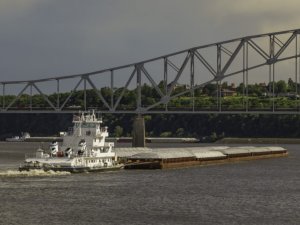 Tidewater could fetch a price around $500 million, said some of the people, who asked not to be identified because the sale process is confidential. A Stonepeak representative declined to comment.

Vancouver, Washington-based Tidewater transports commodities including petroleum products, waste, grain and woodchips, according to Stonepeak’s website. Its reach spans 465 miles (748 kilometers) from the Pacific Coast to the inland Port of Lewiston, Idaho, including along the Columbia and Snake River systems. Stonepeak acquired the business in 2012.

Stonepeak is planning to open an office in Austin, Texas, in part to protect its executives from potentially higher New York state taxes, Bloomberg reported last week. It’s the second infrastructure investor known to be plotting such a move, with I Squared Capital — a firm founded by former Morgan Stanley dealmakers — set to open a Miami office this year.

This news is a total 1387 time has been read
Tags: U.S. Barge Operator Tidewater Reportedly Put Up for Sale