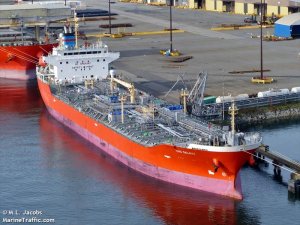 The indictment and an earlier-filed criminal allege that Dela Cruz ordered crew members of the Zao Galaxy, a 16,408 gross-ton tanker owned by FGL Moon and operated by Unix Line, to illegally dump oily bilge water overboard from the vessel on at least four occasions during a voyage from the Philippines to Richland, California, in late January to early February 2019. The indictment alleges video evidence of the crimes.

Based on AIS data, one of the dumping incidents occurred when the Zao Galaxy was approximately three nautical miles west of the Golden Gate Bridge, according to the affidavit.

According to the indictment, Dela Cruz, 37, was the First Assistant Engineer on the Zao Galaxy and was responsible for making entries into the ship’s Oil Record Book, which contained no entries documenting the illegal discharges of oily waste. The indictment further alleges that Dela Cruz attempted to persuade a lower-level crewmember to withhold relevant information regarding the dumping from the U.S. Coast Guard.

If convicted, Dela Cruz could face up to thirty-one years in prison and fines up to $750,000. FGL Moon and Unix Line are face criminal fines up to $1.5 million each.

This news is a total 319 time has been read
Tags: U.S. Charges Foreign Shipping Companies