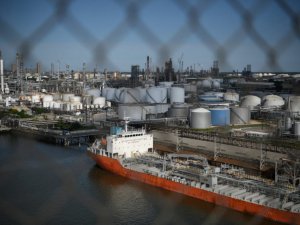 U.S. crude oil stockpiles rose by 19 million barrels last week, the biggest one-week increase in history, the U.S. Energy Information Administration said, as refiners throttled back activity due to slumping demand as a result of the coronavirus pandemic.

The build for the week ended April 10 was much larger than the Reuters poll calling for a 11.7 million-barrel rise and offsets some of the optimism that had bloomed as a result of a worldwide pact between oil producers to cut output sharply. Crude futures slumped on the news.

“Even though we knew it was going to be bad, it’s worse than people thought,” said Phil Flynn, an analyst at Price Futures Group in Chicago. “You look at gasoline demand and it’s pathetic. If you were going to write a nightmare report about petroleum, this is it.”

Worldwide fuel demand has dropped by roughly 30% as businesses have shuttered, and residents avoid public gatherings and travel due to the pandemic, which has killed more than 130,000 people and infected 2 million. Most U.S. states have issued orders asking people to stay at home; gasoline demand over the last four weeks has dropped by 32% from the year-ago period, EIA said.

Refiners have responded by cutting crude purchases and processing; they were operating at 69% of capacity nationwide , lowest since September 2008, and their actions to counter weak demand is rippling through pipeline companies and oil producers. The latter are being forced to cut production, as some pipeline companies have said they cannot ship oil unless it has a proven destination.

Storage, meanwhile, continues to fill. Crude stocks at the Cushing, Oklahoma, delivery hub for U.S. crude futures rose by 5.7 million barrels last week, the EIA said, and now total 55 million barrels. The hub has about 76 million barrels of capacity, and could be full by mid-May, pipeline companies have said.

Distillate stockpiles, which include diesel and heating oil, rose by 6.3 million barrels in the week to 129 million barrels, versus expectations for a 1.4 million-barrel rise, the EIA data showed. Demand for distillate products has held up better than gasoline, down 8% over the most recent four-week period.

U.S. gasoline stocks rose by 4.9 million barrels in the week to record high at 262.2 million barrels, the EIA said, compared with expectations for a 6.4 million-barrel rise. ?

This news is a total 933 time has been read
Tags: crude oil, Oil