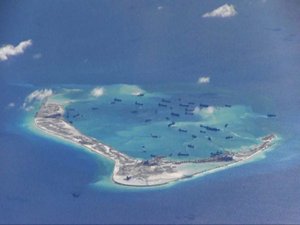 The United States on Wednesday blacklisted 24 Chinese companies and targeted individuals it said were part of construction and military actions in the South China Sea, its first such sanctions move against Beijing over the disputed strategic waterway.

The U.S. Commerce Department said the two dozen companies played a “role in helping the Chinese military construct and militarize the internationally condemned artificial islands in the South China Sea.”

Separately, the State Department said it would impose visa restrictions on Chinese individuals “responsible for, or complicit in,” such action and those linked to China’s “use of coercion against Southeast Asian claimants to inhibit their access to offshore resources.”

It was the latest U.S. move to crack down on firms whose goods may support Chinese military activities and comes in the run up to the Nov. 3 U.S. election, in which both President Donald Trump and rival Joe Biden have been sharply critical of China.

The United States accuses China of militarizing the South China Sea and trying to intimidate Asian neighbors who might want to exploit its extensive oil and gas reserves.

U.S. warships have gone through the area to assert the freedom of access to international waterways, raising fears of clashes.

A U.S. defense official, speaking on the condition of anonymity, told Reuters that on Wednesday China launched four medium-range ballistic missiles that hit the South China Sea between Hainan Island and the Paracel Islands.

The official added that an assessment was underway to determine the type of missile launched.

The Hong Kong-based South China Morning Post newspaper quoted a source close to the Chinese military as saying that China had launched two missiles, including an “aircraft-carrier killer”, into the South China Sea on Wednesday morning in a warning to the United States.

China complained that the United States had sent a U-2 reconnaissance plane into a no-fly zone over Chinese live-fire military drills on Tuesday.

The Pentagon said a U-2 flight conducted in the Indo-Pacific region was “within the accepted international rules and regulations governing aircraft flights.”

The Chinese embassy in Washington did not immediately reply to a request for comment on U.S. announcements, but in July, Beijing said it was not afraid of any sanctions the United States might impose and accused it of stirring up trouble and destabilizing the region.

Washington warned last month it could respond with sanctions against Chinese officials and enterprises involved in coercion in the South China Sea after it announced a tougher stance rejecting Beijing’s claims to offshore resources there as “completely unlawful.”

China claims virtually all of the potentially energy-rich South China Sea, but Brunei, Malaysia, the Philippines, Taiwan and Vietnam also lay claim to parts of an area through which about $3 trillion of trade passes each year.

“This is the first time the U.S. has levied any type of economic sanction against Chinese entities for behavior in the South China Sea,” said Greg Poling, a South China Sea expert at Washington’s Center for Strategic and International Studies.

“It probably doesn’t make much impact on those entities directly – I doubt that there is much CCCC needs to buy from the U.S. that it can’t get from other suppliers. And these certainly aren’t the financial sanctions that some might have expected … But it could be a start at trying to convince Southeast Asian partners that the new policy is more than just rhetoric.”

The Commerce Department said it was adding the 24 firms to its “entity list,” which restricts sales of U.S. goods shipped to them and some more limited items made abroad with U.S. content or technology. Companies can apply for licenses to make the sales, but they must overcome a high bar for approval.

The actions follow a blueprint used by Washington in its attempt to limit the influence of Huawei Technologies Co for what it says are national security reasons.

This news is a total 2478 time has been read
Tags: south china sea , First Sanctions in South China