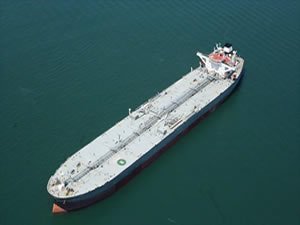 The U.S. has gone to court to seize 2 million barrels of oil that it claims came from Iran, as Joe Biden’s administration shows little sign of taking a softer line on Tehran.

The Department of Justice filed a case in a U.S. district court, seeking to seize the cargo on the Greek-owned Achilleas tanker, according to a statement on Tuesday.

They “attempted to disguise the origin of the oil using ship-to-ship transfers, falsified documents, and other means, and provided a fraudulent bill of lading to deceive the owners of the Achilleas,” the department said.

While President Biden has signaled he wants to reengage with Iran, his Secretary of State Antony Blinken said last week the Islamic Republic must first rein in its nuclear activities.

Biden’s predecessor, Donald Trump, tightened sanctions on Iran in an effort to halt its oil sales, reduce its nuclear program and stop it interfering in other Middle Eastern countries.

The IRGC and the IRGC-QF, both designated as terrorist organizations by the U.S., use oil money to buy weapons of mass destruction and carry out human rights abuses, according to the DOJ.

The Achilleas’ owner, Capital Ship Management Corp., alerted U.S. authorities to the possibility that it had unknowingly taken on Iranian crude, after initially thinking it came from Iraq, Bloomberg reported last month.

Washington ordered the Liberia-flagged ship to sail to the U.S. before Biden came to power on Jan. 20, according to people familiar with the matter.

The vessel is known as a Very Large Crude Carrier and is fully loaded, according to shipping documents. It’s heading to the U.S. and is currently sailing close to the South American coast, according to tracking data compiled by Bloomberg.

Iranian oil production has almost halved since mid-2018, when Trump pulled out of a nuclear accord with Iran and tightened sanctions. Tehran has increased energy exports in recent months, according to several firms that monitor its output, in what may be an attempt to test Biden’s resolve.

The bulk of the oil that is shipped out of Iran ends up in China. Most traders are avoiding buying Iranian petroleum as long as the sanctions are in place. Iran seized a South Korean tanker last month in the Strait of Hormuz amid a spat over $7 billion of oil sales it says is trapped in the Asian country due to the sanctions. Crew members were released this week, but the ship hasn’t been.

South Korean officials are finalizing talks with the U.S. about unfreezing some of it, Yonhap news agency reported on Wednesday.

The U.S. will need to prove its allegations about the Achilleas’s oil in court proceedings, said Tuesday’s statement. If it wins the case, it may send proceeds from the oil to a government fund for victims of terrorism.

“The U.S. Attorney’s Office for the District of Columbia will continue working with our law enforcement partners to stem the flow of illicit oil from Iran’s Islamic Revolutionary Guard Corps and Qods Force,” Acting U.S. Attorney Michael R. Sherwin said in the statement.