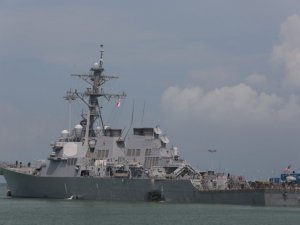 The U.S. Navy announced on Monday a fleet-wide probe and plans for temporary halts in operations to focus on safety, as it searched for 10 sailors missing after the fourth major accident in the U.S. Pacific fleet this year.

The guided-missile destroyer John S. McCain and the tanker Alnic MC collided on Monday while the warship was nearing Singapore for a routine port call. The collision tore a hole in the warship’s waterline, flooding compartments that included a crew sleeping area, the U.S. Navy said.

“Initial reports indicate John S. McCain sustained damage to her port side aft,” it said in a statement. “There are currently 10 sailors missing and five injured.”

U.S. Chief of Naval Operations Admiral John Richardson said there were no indications so far the collision was intentional or the result of cyber intrusion or sabotage. “But review will consider all possibilities,” he said on Twitter.

Richardson told reporters said he was asking his fleet commanders worldwide for a one-to-two-day staggered “operational pause” to discuss action to ensure safe and effective operations. He envisaged this could begin within a week.

Richardson said a comprehensive review would examine the training of U.S. forces deployed to Japan “to make sure we are doing everything we can to make them ready for operations and warfighting.”

This would include looking at “operational tempo, trends in personnel, materiel, maintenance and equipment.”

The review would be conducted on “a very tight timeline” Richardson said, adding: “We need to get to the bottom of this.”

The John S. McCain’s sister ship, the Fitzgerald, almost sank off the coast of Japan after colliding with a Philippine container ship on June 17. The bodies of seven U.S. sailors were found in a flooded berthing area after that collision.

The U.S. Navy said last week it had removed the two senior officers and the senior enlisted sailor on the Fitzgerald following an investigation into that collision.

Retired Admiral James Stavridis, a former NATO supreme commander, said the need for an operational pause and the loss of two front-line ballistic missile defense destroyers for months was “deeply worrisome,” especially at a time of high tensions with North Korea.

“The Navy has some real soul-searching ahead, and this appears to be a systemic failure of some kind,” he said.

Mac Thornberry, the Republican chairman of the U.S. House Armed Services Committee, said the latest collision was the fourth major accident within the U.S. Pacific Fleet this year and highlighted funding cuts and the time crews spent at sea.

“Congress has a duty to provide our sailors with the additional resources they so clearly need, and to do so immediately,” he said in a statement.

In May, a South Korean fishing vessel collided with the guided missile cruiser Lake Champlain. Another guided-missile cruiser, Antietam, damaged its propellers in January while anchoring in Tokyo Bay.

The John S. McCain is named for the father and grandfather of U.S. Republican Senator John McCain, who were both admirals. McCain, the chairman of the Senate Armed Services Committee, is undergoing treatment for brain cancer.

“My thoughts and prayers continue to be with the sailors and families of the USS John McCain and USS Fitzgerald,” he said in a statement, in which he called for an investigation that delivered full transparency and accountability.

The accidents have come at a tense time.

This month, the John S. McCain sailed within 12 nautical miles of an artificial island built by China in the South China Sea, the latest operation to counter what the United States sees as China’s efforts to control the waters.

Also this month North Korea threatened to fire ballistic missiles towards the U.S. Pacific territory of Guam after Trump said he would unleash “fire and fury” if Pyongyang threatened the United States.

The Navy said significant damage to the John S. McCain’s hull caused flooding to berthing, machinery, and communications rooms. But the crew was able to stop the flooding, and the ship reached Singapore’s Changi Naval Base under its own power.

Singaporean, Malaysian and Indonesian ships and aircraft joined the search for the missing sailors, the U.S. Navy said.

Four of those hurt were taken to a hospital in Singapore with non-life threatening injuries. The fifth needed no further treatment.

Reuters video footage from the Singapore Strait showed an area of impact about 6 meters (20 ft) wide in the John S. McCain’s port side.

A crew member on the Alnic MC told Reuters there was some damage to a valve, but no oil spilled from the Liberian-flagged, 183-meter-long (600-ft) tanker, which was carrying almost 12,000 tonnes of fuel oil from Taiwan to Singapore.

Singapore’s Maritime and Port Authority said no injuries were reported on the Alnic, which suffered some damage above the waterline.

The waterways around Singapore are some of the busiest in the world, carrying about a third of global shipping trade.

Ben Stewart, commercial manager of Maritime Asset Security and Training in Singapore, said early indications suggested the warship may have turned across the front of the tanker.

This news is a total 945 time has been read
Tags: U.S. Navy Announces Fleet-Wide Probe In Wake of Major Accidents