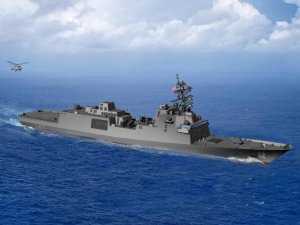 The U.S. Navy has awarded Marinette Marine Corporation with the detail design and construction contract for up to 10 Guided Missile Frigates.

The initial contract covers one base ship for $795 million and up to nine additional ships which could bring the total value to more than $5.5 billion if all options are exercised.

“The Navy’s Guided-Missile Frigate (FFG(X)) will be an important part of our future fleet,” said Chief of Naval Operations, Adm. Mike Gilday. “FFG(X) is the evolution of the Navy’s Small Surface Combatant with increased lethality, survivability, and improved capability to support the National Defense Strategy across the full range of military operations. It will no doubt help us conduct distributed maritime operations more effectively, and improve our ability to fight both in contested blue-water and littoral environments.”

The acquisition process for the frigates was launched in 2017. It launched the detail design and construction Request for Proposals last June with technical proposals received in August and cost proposals were received in September. Competitors for the contract included Huntington Ingalls Industries, a team consisting of General Dynamics and Spain’s Navantia, and Austal.

Marinette Marine Corporation of Marinette, Wisconsin is a subsidiary of Italian shipbuilder Fincantieri.

This news is a total 979 time has been read
Tags: fincantieri, marinette marine, U.S. Navy