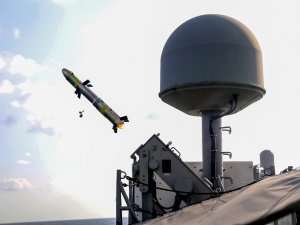 The exercise demonstrated a proven capability for the ships to defend against small boat threats and ensure maritime security through key chokepoints in the U.S. Central Command area of responsibility, connecting the Mediterranean and the Pacific through the western Indian Ocean and three strategic choke points.

“The data collected from this year’s exercise will help improve the GMS to provide increased lethality amongst our FDNF ships,” Lt. Cmdr. Ronald Jenkins, commanding officer of the Sirocco. “Each participating ship can apply lessons learned to sharpen individual tactics and procedures to increase precision in weapons employment.”

Eager to integrate and demonstrate the upgraded GMS into their ships’ systems, each captain was impressed with its capabilities and the crew’s performance during the exercise.

“This year’s Fire Exercise (FIREX) was an outstanding opportunity for the crews to test our skills and the capabilities of one of our primary weapons systems,” said Lt. Cmdr. Dale Tourtelotte of the Hurricane. “It was exciting to see my crew and the various technical experts come together and execute the FIREX successfully.”

U.S. 5th Fleet area of operations encompasses about 2.5 million square miles of water area and includes the Arabian Gulf, Gulf of Oman, Red Sea and parts of the Indian Ocean. The expanse is comprised of 20 countries and includes three critical choke points at the Strait of Hormuz, the Suez Canal and the Strait of Bab al Mandeb at the southern tip of Yemen.