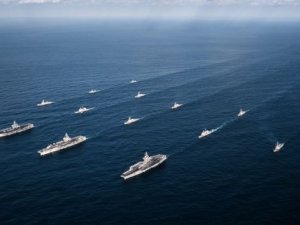 The U.S. Navy and the Marine Corps have moved to ban the public display of the Confederate battle flag at all installations, reflecting growing sensitivity to racial bias in the wake of the police-reform protest movement.

"The Chief of Naval Operations, Adm. Mike Gilday, has directed his staff to begin crafting an order that would prohibit the Confederate battle flag from all public spaces and work areas aboard Navy installations, ships, aircraft and submarines," said U.S. Navy spokesman Cmdr. Nate Christensen in a statement. "The order is meant to ensure unit cohesion, preserve good order and discipline, and uphold the Navy's core values of honor, courage and commitment."

Marine Corps Commandant General David H. Berger banned the Confederate battle flag in April. In a statement this week, he described the decision as a continuation of his view that "there is no place in [the] Corps for racists - whether their intolerance and prejudice be direct or indirect, intentional or unintentional."

"Current events are a stark reminder that it is not enough for us to remove symbols that cause division – rather, we also must strive to eliminate division itself. The trust Marines place in one another on a daily basis demands this. Only as a unified force, free from discrimination, racial inequality, and prejudice can we fully demonstrate our core values, and serve as the elite warfighting organization America requires and expects us to be," said Berger.

The controversial flag was designed in the early 1860s by prominent South Carolinian politician and pro-slavery advocate Col. William Porcher Miles. When the Confederate States Congress was selecting its new national flag in 1861, Miles argued against the final "Stars and Bars" design because it looked too much like the American flag. "It is idle to talk of 'keeping' the flag of the United States when we have voluntarily seceded from them," Miles's committee contended.

While Miles' flag was not selected for official use, the Stars and Bars proved difficult to distinguish from the American flag on the battlefield, and Miles' design was adopted by many Confederate units as a practical alternative. In 1948, long after the war's end, its use was revived by the pro-segregation States' Rights Democratic Party (better known as the Dixiecrats), a breakaway faction of the Democratic Party. It was widely used in the South as a symbol of opposition to federally-imposed racial desegregation in the 1960s.

Over the years, the flag has taken on different meanings for different groups. In the South, many associate it with regional pride, Southern heritage and the political belief that individual states have primacy in setting policy within their borders (states' rights). For others, the flag has a range of positive connotations - like rural identity and Appalachian cultural identity - and some that are less so, including white supremacy, segregationism, racism and treason. Prominent modern-day users include self-identified hate groups like the Klu Klux Klan, the League of the South and the neo-Nazi skinhead movement, according to the Anti-Defamation League and the Southern Poverty Law Center.

As of the most recent polling - conducted in 2015 - a majority of Americans associated the flag with Southern pride, without negative connotations. Three out of four African-American respondents described it as a symbol of racism.

This news is a total 930 time has been read
Tags: U.S. Navy Joins Marine Corps in Banning Confederate Flag