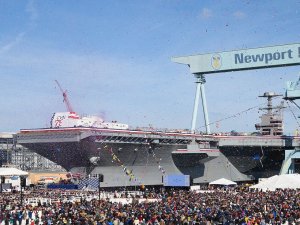 The new technology and warfighting capabilities that the John F. Kennedy brings to the fleet will transform naval warfare, supporting a more capable and lethal forward-deployed U.S. naval presence. In an emerging era of great power competition, CVN 79 will serve as the most agile and lethal combat platform in the world, with improved systems that enhance interoperability among other platforms in the carrier strike group, as well as with the naval forces of regional allies and partners.

The USS John F. Kennedy aircraft carrier is powered by two new-design AB1 nuclear reactors. The reactors are manufactured by Bechtel, which beat out longtime naval reactor giants General Electric and Westinghouse for the reactor contract.

The USS John F. Kennedy aircraft carrier will have a crew of 4,660 personnel including 500 officers, 3,790 enlisted and other security and special persons, based on the latest published specifications

This news is a total 799 time has been read
Tags: USS John F. Kennedy is the second aircraft carrier of the Gerald R. Ford class, built to replace United States Navy's existing Nimitz-class aircraft carriers. With more than 20, 000 attendees, Presiden