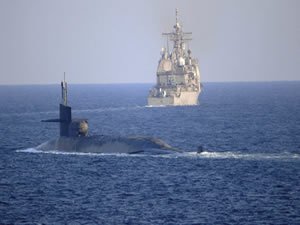 The U.S. Navy’s nuclear-power submarine USS Georgia has entered the Arabian Gulf after transiting through the Strait of Hormuz.

The Navy said the sub was accompanied by the guided-missile cruisers USS Port Royal (CG 73) and USS Philippine Sea (CG 58) when it transited on December 21.

“Georgia’s presence in the U.S. 5th Fleet area of operations (AOO) demonstrates the U.S. Navy’s ability to sail and operate wherever international law allows,” the Navy said in a statement.

The USS Georgia is deployed to the U.S. 5th Fleet area of operations in support of naval operations to ensure maritime stability and security in the Central Region, which connects the Mediterranean and Pacific through the Western Indian Ocean and includes critical chokepoints such as the Strait of Hormuz, the Bab el-Mandeb Strait and the Suez Canal.

USS Georgia (SSGN 729), an Ohio-class guided-missile submarine, can carry up to 154 Tomahawk land-attack cruise missiles and can be configured to host up to 66 Special Operations Forces.

“As an inherently flexible maneuver force, capable of supporting routine and contingency operations, Georgia’s presence demonstrates the United States’ commitment to regional partners and maritime security with a full spectrum of capabilities to remain ready to defend against any threat at any time,” the Navy said.

Ohio’s arrival in the Gulf comes about a month after the U.S. aircraft carrier USS Nimitz was re-deployed there from the Indian Ocean just a few days after Iran’s top nuclear scientist was killed in an ambush, although the Navy said the deployment was not related to any specific threats.

The U.S. Navy in May warned mariners in the Gulf to stay at least 100 meters away from U.S. warships or risk being “interpreted as a threat and subject to lawful defensive measures,” an apparent thinly-veiled warning to Iran after Iranian vessels swarmed on U.S. Navy and Coast Guard ships the month before.

Tensions between Washington and Tehran have escalated since 2018 when President Trump withdrew from Iran’s 2015 nuclear deal and reimposed sanctions that have crippled Iran’s economy.