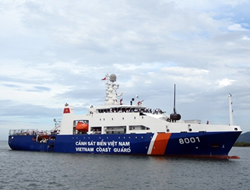 The U.S offered $32.5 million in assistance to Southeast Asian nations, more than half to Vietnam, to boost maritime security, which comes as tension grows with China over rival claims in the South China Sea.
On his first visit to Vietnam as secretary of state, John Kerry denied that the assistance had anything to do with China. He however called for “intensified negotiations and diplomatic initiatives” between China and Japan on resolving differences in the East China Sea.
Kerry said up to $18 million of the funds would go toward strengthening Vietnam’s coastal patrols to help its coastguard react quicker to search and rescue missions, and for disasters. The funding would also be used to buy five “fast” patrol boats for Vietnam’s coastguard in 2014, he added. “This announcement has nothing to do with a recent announcement by any other country,” Kerry told a joint news conference with his Vietnamese counterpart, Pham Binh Minh.
www.turkishmaritime.com.tr
This news is a total 1158 time has been read