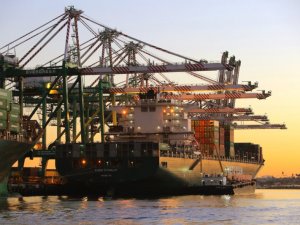 Dockworkers across the country stopped work today in a show of support for George Floyd and the Black Lives Matter movement.

Workers with the International Longshore and Warehouse Union (ILWU) stopped work and lay down their tools Tuesday morning for an 8 minute and 46 second moment of silence in honor of George Floyd and all victims of police brutality.

The ILWU represents dockworkers primarily on the U.S. West Coast with approximately 40,000 members in 50 local unions in California, Oregon, Washington, Alaska and Hawaii, as well as British Columbia, Canada.

“Our union has a long history of confronting racism on the job, in our communities and around the world,” said ILWU International President Willie Adams in a letter to ILWU Coast Longshore Division.  “Today we’re joining millions of people who are demanding justice and fundamental change.”

The ILWU is joining other labor unions in calling for the immediate resignation of the president of the Minneapolis police union.

“There is no place in the Labor Movement for a leader who defends the act of depravity that result in the death of Mr. Floyd,” the letter stated. The IWLU has also condemned all forms of racism, and states in no uncertain terms that Black Lives Matter.

The 8 minutes and 46 seconds is representative of the amount of time George Floyd was pinned to the ground by Minneapolis police officers on May 25, 2020.

“Our nation needs to heal, and we want to demonstrate a powerful unity among our ILA and USMX family to a grieving nation that is crying for change,” said Harold Daggett, President of the 65,000?member ILA, and David Adam, Chairman and CEO of USMX. “Together we will shut down our cranes and computers; power off our equipment to pause and reflect on how we can find a way to be better as individuals and a country where all citizens should be guaranteed the same respect, freedoms and liberties.”

The stop work protests were scheduled to take place Tuesday beginning at 12 p.m. EDT/9 a.m. PDT to coincide with a final memorial service and funeral for George Floyd.

This news is a total 637 time has been read
Tags: black lives matter, u.s. ports