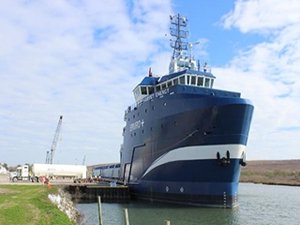 In June 2019, Harvey Gulf announced plans to install a battery-power system on two of the company’s PSV vessels.

The United States's first commercial tri-fuel powered vessel is being introduced with the addition of battery power to an existing vessel. Fourteen months after announcing that it had retained ABS to class the conversion of two of its PSV vessels to operate on battery power, as well as their existing LNG and diesel fuel systems, Harvey Gulf International Marine has completed the first conversion.

In June 2019, Harvey Gulf announced plans to install a battery-power system on two of the company’s PSV vessels. Built in 2003, each of the 1,739 gross ton vessels is 240 feet long with a cruising speed of 10 knots. The company recently completed the conversion of the PSV Harvey Energy and will also complete the installation of a GE battery-power system on the PSV Harvey Champion in September. The battery capacity aboard the two vessels will be enough to sail in and out of harbor on electric power with fewer engines running, while also supplementing hotel load electricity when docked, reducing noise and pollution levels in the harbor.

According to ABS’s announcement when the class approval was commencing, the installation of a 1,450 kW battery hybrid package was expected to reduce the vessels' exhaust emissions, fuel consumption, and noise levels. The overall fuel cost savings were expected to be in the range of 10 to 20 percent. The ability to operate on battery power will also add redundancy during dynamic positioning (DP) operations at offshore platforms.

This news is a total 2529 time has been read
Tags: U.S.'s First Tri-Fuel Vessels Feature Battery, Diesel and LNG Power