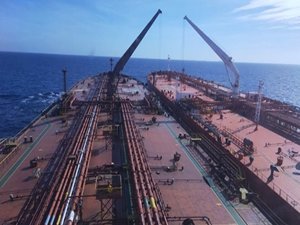 The U.S. government has convinced the owners of four product tankers carrying Iranian gasoline to alter their voyages and transfer the shipper's cargoes into American custody.

The U.S. Justice Department filed suit to seize the Venezuela-bound cargoes in July. According to the complaint, the shipments were set up by Iranian national Mahmoud Madanipour, who allegedly has ties to the Islamic Revolutionary Guard Corps (IRGC). "The profits from these activities support the IRGC’s full range of nefarious activities, including the proliferation of WMD and their means of delivery, support for terrorism, and a variety of human rights abuses, at home and abroad," the Justice Department claimed in the filing.

The vessels in question were identified as the Bella, Bering, Pandi and Luna, all registered with a U.S.-based open flag administration. All of these vessels are operated by two Piraeus-based ship managers.

According to the complaint, these four vessels took on a combined total of about 1.1 million barrels of gasoline for transport to Venezuela. The petroleum industries of Venezuela and Iran are both subject to stringent American sanctions.

The complaint indicates that one of the shipowners involved in the transaction had misgivings about the arrangement and the risk of sanctions violations. According to the complaint, a co-conspirator texted Madanipour to let him know that “the ship owner doesn’t want to go because of the American threat, but we want him to go, and we even agreed We will also buy the ship."

Effective July 1, the name of the 24-year-old Pandi was shortened to Andy, a practice frequently seen in the run-up to a demolition sale and end-of-life voyage. Her Equasis record indicates that she has been broken up.

While most analysts considered the cargo seizure proceeding to be unenforceable, since the shipments would not be transiting U.S. waters, the owners of the four tankers in question have agreed to transfer the Iranian cargoes to other, unspecified vessels and hand them over to the U.S. government, according to Reuters. The ships themselves and the crews will not be detained.

Any agreement to transfer a shipper's cargo to a foreign government - arranged mid-voyage, while on the high seas, without the shipper's authorization - would be an exceptionally unusual decision for a shipowner. The motive was not disclosed, but in recent months the United States has taken a hard line with owners and flag states about ships carrying cargoes in violation of U.S. sanctions. Some owners have been sanctioned themselves, with their U.S.-domiciled assets frozen and their access to the U.S. financial system blocked.

According to Reuters, the Iranian military's boarding of the tanker Wila in the Gulf of Oman yesterday was in retaliation for a shipowner's decision to transfer Iranian cargoes to U.S. custody. The Wila's ship manager shares a Piraeus address with the manager of the Bering and the Pandi.

This news is a total 2351 time has been read
Tags: U.S. Seizes Four Iranian Fuel Cargoes