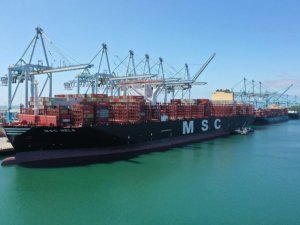 U.S. trade in goods and services plunged in April to the lowest level in almost a decade as the Covid-19 pandemic stifled demand and hindered logistics.

The overall gap in goods and services trade expanded to $49.4 billion, matching the median estimate in a Bloomberg survey of economists and the widest since August, from a revised $42.3 billion in March.

Foreign trade was already easing prior to the pandemic, and now, faced with supply-chain disruptions, a previously incomprehensible surge in U.S. unemployment and a drop-off in demand, the world’s largest economy has pulled back more dramatically. Tensions between the U.S. and China have been escalating, with President Donald Trump blaming the Asian nation for misleading the world about the scale and risk of the coronavirus outbreak.

The report showed imports of merchandise from China rebounded in April to $35.2 billion from $24.2 billion in March, while exports edged up to $9.3 billion, leaving a deficit of $7.2 billion. The trade report didn’t include country-by-country data for goods and services, with the Commerce Department noting that these figures will be made available on June 8.

Reflecting the pandemic and lockdowns of economics around the world, the value of travel-related imports and exports slumped to $4.4 billion, an all-time low in data back to 1999.

Among merchandise trade, the decline in exports was widespread with U.S. companies shipping less capital equipment, motor vehicles, consumer goods and industrial supplies such as oil. The nation also received fewer capital and consumer goods, vehicles and food from overseas producers. Food exports are at risk of declining after Chinese government officials this month telling state-run agricultural companies to pause purchases of some American farm goods including soybeans.

This news is a total 208 time has been read
Tags: coronavirus, trade war, u.s. ports