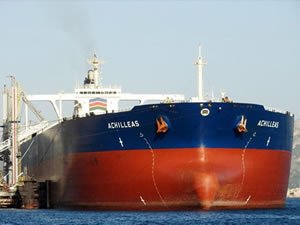 The U.S. is trying to seize around 2 million barrels of what it thinks is Iranian oil, according to people familiar with the matter, in Washington’s latest attempt to block the Islamic Republic’s energy exports.

The crude is on board the Liberia-flagged Achilleas, which is sailing to the U.S. after the Department of Justice issued a seizure order, said the people, who asked not to be identified as they’re not authorized to speak to media.

The order came before Joe Biden succeeded Donald Trump as U.S. president on Jan. 20, according to the people. Under Trump, Washington tightened sanctions on Iran in an effort to halt its oil sales, end its nuclear activities and stop it interfering in other Middle Eastern countries.

The Achilleas’ Greek owner, Capital Ship Management Corp., alerted U.S. authorities to the possibility it had unknowingly taken on Iranian crude, after initially believing it came from Iraq, said the people. The vessel is fully loaded and can carry more than 2 million barrels, according to shipping documents.

Biden has said he wants to renegotiate a nuclear pact with Iran that Trump abandoned in 2018. But Biden’s nominee for Secretary of State, Antony Blinken, said last week a rapprochement is a “long way” off.

Iran pumped about 2 million barrels of crude a day in December, according to data compiled by Bloomberg. That’s barely half what it was producing before Trump left the nuclear deal, known as the Joint Comprehensive Plan of Action, and tightened sanctions. Of today’s output, only around 10% is exported, most of it to China.

The Achilleas, a vessel known as a Very Large Crude Carrier, received its oil from another ship at the United Arab Emirates port of Fujairah in November. According to the shipping documents, the Achilleas was then scheduled to sail to the Omani capital of Muscat.

Its tracking system was switched off from Jan. 1 until Jan. 13, when it was sailing near South Africa, according to data compiled by Bloomberg. It’s now traveling across the South Atlantic Ocean.

The U.S. has tried to seize Iranian petroleum before. Last year, it intercepted vessels it said were carrying gasoline from the Islamic Republic to Venezuela.

Many ships leaving Iran switch off their transponders, making it difficult to track them and to calculate the level of the country’s exports, which the government doesn’t disclose.