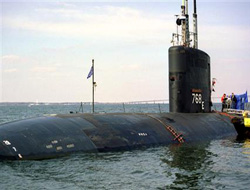 Nuclear-powered U.S. submarine and another U.S. vessel collided in the Strait of Hormuz.

Nuclear-powered U.S. submarine and another U.S. vessel collided in the Strait of Hormuz.

Nuclear-powered U.S. submarine and another U.S. vessel collided on Friday in the Strait of Hormuz but there was no damage to the atomic propulsion unit, the U.S. Navy said.

Fifteen sailors were slightly injured in the collision between the submarine USS Hartford and an amphibious vessel, USS New Orleans, it said in a statement.

"There is no damage to the nuclear propulsion plant of the Hartford," U.S. Fifth Fleet spokesman Lieutenant Nathan Christensen told.

The Strait of Hormuz, a narrow stretch of water separating Oman and Iran connects the biggest Gulf oil producers, such as Saudi Arabia, with the Gulf of Oman and the Arabian Sea.

Around 40 percent of globally traded oil leaves the region through the Strait.

"There is no disruption to shipping traffic in the Strait. Both ships are operating under their own power and have passed through the strait," Christensen said.

The collision in the early hours of Friday caused a 25,000-gallon oil spill. The 15 injured were aboard the submarine.

"New Orleans suffered a ruptured fuel tank, which resulted in an oil spill of approximately 25,000 gallons of diesel fuel marine," the U.S. Navy statement read, adding the incident was being investigated.

In July 2008, the International Energy Agency estimated that more than 15 million barrels per day (bpd) of crude passed through the narrow strait on tankers.

This news is a total 5181 time has been read