Uganda may open a new terminal 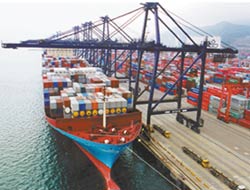 Uganda may soon open a dry dock and container terminal in Mombasa.

Uganda may soon open a dry dock and container terminal in Mombasa.

Uganda may soon open a dry dock and container terminal in Mombasa. This follows fruitful discussions between the Governments of Kenya and Uganda to exchange land on reciprocal basis in Kampala. This was disclosed by Uganda Permanent Secretary in the Ministry of foreign affairs Amb James Mugume who called on Kenya Ports Authority Managing Director early this week.

He said Presidents Mwai Kibaki and Yoweri Museveni had agreed to have a one-stop centre in Kampala for Kenyan business community in exchange of land to set up a terminal to handle Ugandan goods in Mombasa.

Representing the MD, Capt. Twalib Khamis, the Harbour Master echoed this effort saying it will compliment the KPA's measures to decongest the port and enhance efficiency in cargo handling.

He noted that congestion at port was a thing of the past while ships waiting period had reduced from 6 days to 5hours or less.

"Container Freights Stations have helped in creating space for the port with cargo volume growing at 3 -4 percent compared to last year," he said.

KPA is currently involved in major expansion programme to enhance the capacity of the port of Mombasa with plans at advanced stage to construct the second container terminal, and dredging of the channel to 15meters to accommodate bigger vessels.

Expected to be complete by 2013, the second terminal will double the capacity of the port and handle over 1.2 Million TEUs.

The Ugandan delegation is in the country to look at the suitability of the proposed land parcels, their sizes, value and future developmental plans.

Mugume said, "we are here to identify land, their suitability and value and proceed to finalize the exchange between the two nations,'.

He said the success of the proposed venture to be on a 3.075 acre land, to be leased for 99 years at makande will improve the long term relations between the two countries.

The plot is jointly owned by Kenya Ports Authority and Kenya the Railways Corporations.

He also said the establishment of the dry dock and container terminal in Mombasa was timely, given that Ugandan goods constituted 75% of transit goods passing through the port and the terminal will help decongest the port and also clear Ugandan goods in time.

This news is a total 1421 time has been read