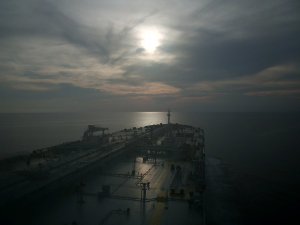 The UK has condemned Iran for breaching assurances given over the Adrian Darya 1 oil tanker after it was detained in Gibraltar for suspected breach of EU sanctions on Syria.

Formerly named Grace 1, the 300,579-dwt VLCC was detained in Gibraltar on July 4 on suspicion that it was sailing to Baniyas Oil Refinery in Syria. It was released on August 15 after Gibraltar received written assurance from the Republic of Iran that the ship’s destination would not be an entity that is subject to the sanctions.

“Iran repeatedly gave assurances to the Government of Gibraltar that the Grace 1/Adrian Darya 1 would not deliver oil to any EU-sanctioned entity in Syria or elsewhere,”

“It is now clear that Iran has breached these assurances and that the oil has been transferred to Syria and Assad’s murderous regime.”

The latest development comes only days after Iran said that the tanker’s 2.1 million barrels of oil were offloaded somewhere on the Mediterranean coast.

“We want Iran to come in from the cold but the only way to do that is to keep its word and comply with the rules based international system.”

After being summoned to a meeting with the British Foreign Secretary in London, Iran’s Ambassador to the UK, Hamid Baeidinejad, said that “it was emphasized that British authorities’ action against the Iranian oil tanker was in violation of international law.”

“EU sanctions cannot be extended to third countries. The tanker has not violated any obligation,” Baeidinejad noted on Twitter.