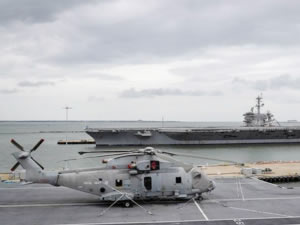 The Royal Navy said HMS Queen Elizabeth skirted south of the hurricane, but sailed close enough for the effects of a four meter swell, five meter wave height and winds gusting 40 knots to be felt throughout the carrier, as the 65,000-metric-ton ship rolled around the Atlantic.

The 'WESTLANT 18' Task Group, which includes the carrier's escort, HMS Monmouth, was forced to take evasive action to avoid the damaging winds which have lashed North and South Carolina and Virginia, bringing tidal surges and very heavy rains throughout the weekend.

Navigating Officer, Lieutenant Commander Sam Stephens, explained that being at sea during a violent storm is often better than being alongside: "It might sound counter-intuitive to sail when you know there is bad weather inbound," he said. "But ships are designed to be at sea. It is better to not be tied up close to things that can cause damage, like jetties or fenders."

"We skirted around the south of the Hurricane," Stephens said. "It’s always better to be behind it and to be able to change direction if it decides to, rather than be ahead of it and find yourself trapped."

Another challenge for the aircraft carrier was operating in increasingly congested water space where scores of U.S. naval ships were spattered after being sortied from their bases ahead of the storm last week.

While in Norfolk, the 'WESTLANT 18' Task Group units will onload  equipment and personnel required to conduct first of class flying trials with test fighter jets from the Integrated Test Force (ITF), based at Naval Air Station Patuxent River, Md.

Around 200 supporting staff, including pilots, engineers, maintainers and data analysts will be joined by two 'orange wired' test aircraft, belonging to the ITF, which are expected to conduct 500 take offs and landings during the trials.

The initial 'developmental trials' will aim to to ascertain, through the specially equipped aircraft and sensors around the ship, the operating parameters of the aircraft and ship.

This news is a total 578 time has been read
Tags: UK Aircraft Carrier Dodges Hurricane Florence