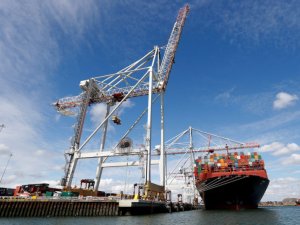 At Southampton docks, a top British port for trade with countries outside the EU

The scene is one of frictionless international commerce. It’s a model that business leaders hope will also work well with Europe after Brexit, but fear it won’t.

Cranes lift containers smoothly on and off enormous ships berthed at the quayside while rows of new cars await shipment to destinations including the United States and Asia.

There is little sign of the customs border that Britain maintains with most of the world apart from European Union states, thanks to a long-refined system of goods declarations completed electronically as ships plough to and from the country.

Less than two percent of goods passing through Southampton, which lies on the south coast of England, are subject to physical checks by customs officials, according to its owner, Associated British Ports.

At the moment Britain has no such customs border with the EU, a free-trade area of 28 states, but it is likely to reimpose one when it leaves the bloc in March, 2019. If London and Brussels fail to strike a trade deal, each side will start imposing import duties on each other’s goods.

Few people believe the current system for non-EU trade can be replicated for EU goods without disruption at the seaports through which 95 percent of Britain’s international trade moves. That means industry’s wish for minimal extra red-tape, delays and costs after Brexit may not be granted.

The government estimates a new, upgraded electronic customs system – due to be introduced just two months before Brexit – will need to process 255 million customs declarations a year, up from 55 million now.

“Is a new IT system going to be able to cope with a sudden massive surge in stuff going through? … It is a highly complex environment and the capacity for glitches is bound to be there,” said Guy Platten, Chief Executive of the UK Chamber of Shipping.

The EU is Britain’s largest trading partner, accounting for 44 percent of exports and 53 percent of imports in 2016.

Around 180,000 companies which now operate only within the EU face making customs declarations for the first time after Brexit. A study by the Institute for Government found that those declarations could mean a total additional cost of 4 billion to 9 billion pounds ($5 billion to $12 billion).

“Costs will be passed on and it is going to impact on the consumer and on prices in the shops in the end,” Platten told Reuters.

The government has proposed two options for a post-Brexit customs deal with the EU: a “highly streamlined” system using technology to create as frictionless a border as possible, and a new customs partnership removing the need for a customs border – an arrangement that would be particularly hard to negotiate.

The first would involve measures such as pre-arrival notifications linked to customs declarations and vehicle registrations so trucks do not have to stop at the border, as well as pre-approved “authorised economic operators” who are given faster clearance.

Pre-authorisation may work for goods on weeks-long sea voyages like many of those coming into Southampton, which handled international trade worth 71 billion pounds in 2014.

But the short length of journeys from continental Europe means there is far less time to process goods before they arrive. Ferries carrying trucks to Dover, Britain’s top port for EU trade, typically take only 90 minutes to arrive from France.

For “just-in-time” supply chains, where parts are delivered as they are needed in the production process, even a short delay would have an impact. Perishable goods, such as Dutch flowers or Spanish tomatoes, are particularly at risk.

Supermarket group Sainsbury’s has warned that food could be left rotting at the border if supply chains are disrupted by customs checks.

Finance minister Philip Hammond raised his concerns this week, saying trucks had to roll off ferries immediately and leave the Dover port, allowing the ship to reload and depart again promptly.

“Anything that caused delay in vehicles exiting the port, delaying vehicles offloading, would cause significant disruption,” he told a parliamentary committee, adding that the government was looking at contingency arrangements for the event of no deal with the EU.

Even spot checks would mean firms could start having to use warehouses in case their goods are among those inspected, possibly adding significant costs to finished products.

Southampton owner ABP says it has space to accommodate customs checks at its ports around Britain. However, there are significant physical constraints elsewhere, particularly at Dover, which handled trade worth 69 billion pounds in 2014 and is hemmed in by white chalk cliffs.

Asked if the capacity of facilities such as warehousing at British ports is adequate, Hammond replied: “No, it is clearly not.”

Around 8,000 EU trucks a day pass through Dover, meaning more than 300 could be stopped if they are checked at a similar rate to non-EU imports — the government says around four percent are currently subject to customs checks at border entry points.

“If they want to do their four percent, then they are going to find somewhere outside the port confines in order to do that,” said James Hookham, Deputy Chief Executive of the Freight Transport Association, which says one hour’s delay at a port adds 15,000 pounds of costs to the trucking industry.

The need to get infrastructure in place and train businesses in a new system means phasing the new regime in will be crucial to minimise disruption, said the Chamber of Shipping’s Platten.

“To get it all implemented within the next 18 months is going to be almost impossible, so there has to be a long transition period to allow business and the supply chain to adjust to the new reality,” he said.

“The nightmare is if nothing is agreed, nothing is done and we have this cut off on March 29, 2019.”

This news is a total 486 time has been read
Tags: UK Customs Model Unlikely to Achieve Frictionless Post-Brexit Trade