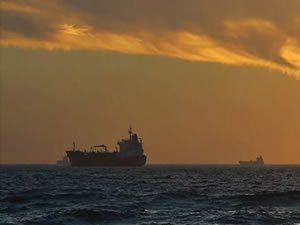 An Israeli-owned merchant ship reportedly came under attack off the coast of Oman in the Arabian Sea, the British military said Friday, offering few other details about the incident.

Israeli officials did not immediately acknowledge the incident, but it comes amid heightened tensions between it and Iran as negotiations remain stalled over Tehran’s nuclear deal with world powers.

Other Israeli ships have been targeted in recent months as well amid a shadow war between the two nations, with Israeli officials blaming the Islamic Republic for the assaults.

An brief initial statement from the British military’s United Kingdom Maritime Trade Operations said an investigation was underway into the incident, which it described as happening late Thursday night just northeast of the Omani island of Masirah.

The location is over 300 kilometers (185 miles) southeast of Oman’s capital, Muscat. The statement did not elaborate, other to say that it suspected the attack did not involve piracy.

Earlier on Thursday, the British military group had said it was investigating another unexplained incident in the same area, but it did not elaborate.

Later Friday, the British Defense Ministry identified the nationality of the ship’s owners, but did not elaborate further. Oman did not immediately acknowledge an attack and officials there did not respond to requests for comment.

The U.S. Navy’s 5th Fleet, which patrols the Mideast, did not immediately respond to a request for comment. The incident comes amid heightened tensions over Iran’s tattered nuclear deal and as negotiations over restoring the accord have stalled in Vienna.

Since then-President Donald Trump unilaterally withdrew America from the accord in 2018, there have been a series of ship attacks in the region suspected to have been carried out by Tehran. Iranian media did not immediately acknowledge the attack Friday.