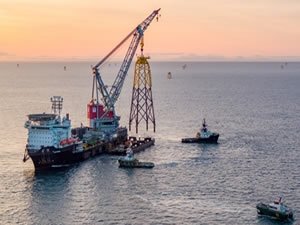 UK Prime Minister Boris Johnson pledged Monday that his administration would invest in shoreside infrastructure to make the UK a major force in ofshore wind power.

Under the plan, Johnson's government is raising its goal for total offshore wind capacity by 2030 by one third, to 40 gigawatts of power.

Notably, the plan calls for one gigawatt of that capacity to come from floating wind towers. "Your kettle, your washing machine, your cooker, your heating, your plug-in electric vehicle - the whole lot of them will get their juice cleanly and without guilt from the breezes that blow around these islands," Johnson said in a virtual address to his Conservative party.

"As Saudi Arabia is to oil, the UK is to wind - a place of almost limitless resource, but in the case of wind without the carbon emissions and without the damage to the environment."

The plan calls for a $200 million government investment in port facilities and wind equipment factories.

It would affect port communities in Teesside and Humber in Northern England, Scotland and Wales, creating about 2,000 construction jobs and translating to about 60,000 direct and indirect jobs by 2030, according to the prime minister's office.

It is a component of a broader program to bring the UK's carbon emissions to net zero by midcentury. The offshore wind industry welcomed the news, along with UK environmental organizations.

If carried through it would help cement the UK's global leadership in this key technology," said Greenpeace UK head John Sauven in a statement.

"But delivering 40 gigawatts of power on to the grid by 2030 requires action in this Parliament." UK shipping interests also reacted positively to the development.

“We welcome the plan announced by the Prime Minister today in support of our offshore wind sector, and the ambitious pledge to decarbonise the UK," said UK Chamber of Shipping Chief Executive Bob Sanguinetti.

"We also look forward to close cooperation with the relevant authorities and developers to ensure safety of navigation for all vessels is not compromised in our busy waters."

While supportive of the prime minister's plan, the British Ports Association cautioned that the government should ensure that the British economy reaps the benefits of installing and operating UK wind farms.

Unless this becomes more mandatory, the UK may well lead the world in offshore wind development but sadly the benefits will continue to be enjoyed largely by our European neighbours and countries further afield," cautioned BPA Chairman Martin Lawlor in a statement.

This news is a total 1485 time has been read
Tags: UK Government Funds Port Infrastructure for Offshore Wind