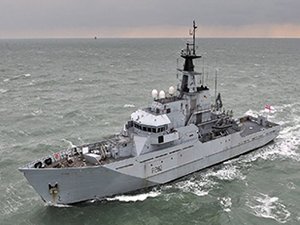 Facing an increase in the number of migrants attempting to cross the English Channel, the UK Home Office has asked for assistance from the Royal Navy to address the number of crossings.

The highly controversial request is part of Home Secretary Priti Patel's pledge to make the risky voyage harder to complete for migrants in small rubber boats.

"I am working to make this route unviable. This involves: 1) stopping the boats leaving France in the first place; 2) intercepting boats and returning those attempting to make a crossing," said Patel in a social media message on Friday.

Over 1,000 migrants arrived in Britain via small craft last month - far above the average - and a record 235 were detained on Thursday alone. The UK has accused France of failing to do enough to prevent crossings. "The French must ensure that migrants who are caught attempting to reach the UK by boat cannot do so again," wrote Immigration Minister Chris Philp in an editorial in The Telegraph. “They must be removed from Calais and given options to either seek protection in France or return to their home country."

Sky News reports that the proposed military intervention would aim to "push back" migrants who cross over into UK waters. One potential obstacle is that the migrants' route - Calais to Dover - occurs entirely within territorial seas, without any international waters in between. Migrants technically have the right to be rescued and make an asylum claim once they enter the UK side, and the Royal Navy would need French permission to operate on the French side of the demarcation line in order to prevent them from crossing over.

"We're talking to French ministers about preventing people leaving France in the first place, and then finding other ways of making sure that we return boats to France when they're trying to make what is a very dangerous crossing," said UK education minister Nick Gibb, speaking to Sky News. "It's not a simple situation, nor is there a simple solution. There are legal barriers and complexities in dealing with this."

To shepherd the new policy through, the director of the UK’s Joint Maritime Security Centre (JMSC), Dan O'Mahoney, has been promoted to the new post of "Clandestine Channel Threat Commander." Patel has tasked him with taking primary responsibility for "making the Channel route unviable for small boat crossings."

The possibility of a fatal capsizing during an at-sea intervention could also cause difficulties for the government, both for ethical and political reasons, analysts noted. The inflatable dinghies used by human traffickers are not seaworthy for an open-water crossing, and they are normally overloaded. Many carry unaccompanied children, and one recent boat carried a disabled person in a wheelchair. A capsizing during a tow or push-back attempt could easily result in casualties.

The UK Ministry of Defense said on Saturday that it is looking at how it can "most effectively assist" the Home Office, potentially including arms-length measures like coordination, surveillance and reconnaissance.

This news is a total 1899 time has been read
Tags: UK Home Office Calls for Royal Navy to Push Back Migrant Boats