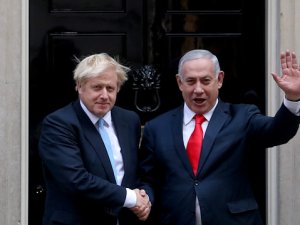 British Prime Minister Boris Johnson on Thursday met with Israeli Prime Minister Benjamin Netanyahu and the U.S. Vice President Mike Pence to discuss a range of issues, a spokesman from Downing Street said in a statement.

Johnson and Netanyahu confirmed "their commitment to a strong U.K.-Israel relationship, including through trade, cooperation on intelligence and security and cultural links between the two countries," it said.

They also discussed the contentious Iran nuclear crisis in which the U.K. and Israeli governments find themselves on the opposite ends.

Israel, along with the U.S., is opposed to the nuclear deal and is in favor of tough sanctions against Tehran. Netanyahu has been supportive of the Trump administration’s withdrawal from the nuclear pact and has been urging the U.K. and the EU to follow suit.

"Both Prime Ministers agreed on the need to prevent Iran getting a nuclear weapon and stop wider destabilizing Iranian behavior. The prime minister stressed the need for dialogue and a diplomatic solution," the statement said.

"Both reiterated their commitment to negotiating an ambitious free trade deal after the U.K. leaves the EU. They agreed that setting up the UK-US Special Relationship Economic Working Group was a positive step," it said.

The U.K.’s Foreign and Commonwealth Office (FCO) also said that Iran’s plan to suspend limits on nuclear research and development is deeply concerning.

"This third step away from its commitments under the nuclear deal is particularly disappointing at a time when we and our European and international partners are working hard to de-escalate tensions with Iran," the FCO said in a statement.

As Johnson met with the Israeli premier and the U.S. vice president, a protest was carried out outside Downing Street, condemning the British prime minister of meeting with Netanyahu, who is facing an investigation of corruption and accused of the murders of Palestinian protesters in the occupied Gaza Strip.