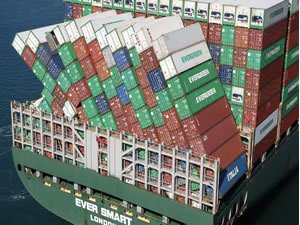 The MAIB highlighted recent cargo loss incidents along with other marine casualties involving UK vessels worldwide or foreign vessels in UK territorial waters in its annual marine casualty report for 2020, providing an overview of accident reports and rec

In 2020, the MAIB published two investigation reports into the collapse of container stacks on large container ships, both of which were transiting the North Pacific Ocean in heavy weather.

The MAIB’s investigation into the October 2017 loss of 42 containers overboard from the UK-flagged Ever Smart about 700 miles east of Japan highlighted weather routing, including bow slamming and hull vibration, as safety issues identified during investigation.

It also determined containers were not stowed or secured in accordance with the guidance contained in the ship’s cargo securing manual; the lashing rod locking arrangements were not used, which increased the risk of loosening; and Verified Gross Mass irregularities were found in 36% of the stow. In another incident, the UK-flagged CMA CGM G. Washington, back in January 2018, lost 137 containers of cargo containers overboard and another 85 were damaged after the ship unexpectedly rolled as much as 20 degrees while on passage in heavy seas from Xiamen, China to Los Angeles, California.

The MAIB issued its report into that accident in January 2020, identifying safety issues including weather routing and parametric rolling, loose lashings, and inaccurate container weight declarations and mis-stowed containers.

The MAIB’s annual report noted that there have been more accidents involving large losses of containers since the two incidents it investigated, the most notable being ONE Apus, and more general concerns raised about large container vessels even before Ever Given grounded in the Suez Canal earlier this year.

The MAIB said such accidents are challenging to investigate due to the multiple inter-related factors involved and that critical evidence could be lost overboard during the accident.

“There is no doubt that accidents involving Ultra Large Container vessels will continue to receive intense focus, but it is too early to say what common themes might emerge from accident investigations and whether these could have wider implications for the sector,” the MAIB said in its report. Since last fall, more than 3,000 containers have fallen into the North Pacific Ocean from large containerships as bigger ships carrying more cargo continue to pour into U.S. ports as U.S. consumers continue to gorge themselves on imported goods from Asia.

In addition to the ONE Apus, which lost an estimated 1,800 boxes overboard back in November, the Maersk Essen lost about 750 boxes while sailing from Xiamen, China, to Los Angeles in January. A month later, 260 containers fell off the Maersk Eindhoven when it lost power in heavy seas.