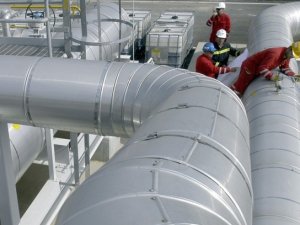 Ukraine saw a 143 percent annual increase in 2014 in natural gas imports from European countries with 5.1 bcm, according to Ukraine's state-owned gas transmission company on Monday.

The country had imported 2.1 bcm natural gas in 2013. As Russia halted its gas flow to Ukraine on June 16 due to disputes over gas price and debt, Ukraine received its gas demand from Slovakia, Hungary and Poland mostly through reverse flows.

However, when the South Stream was cancelled by Russian company Gazprom, Hungary began resuming gas transmission on Jan. 1.

Russia also resumed gas supplies on Dec. 9, after Ukraine wired an advanced payment of $378 million to Russian gas giant Gazprom on Dec. 5 to secure the imports of 1 bcm of gas. Ukraine's total debt to Russia for natural gas was $3.1 billion.

This news is a total 2572 time has been read
Tags: Ukraine, natural gas, company, Hungary, Poland