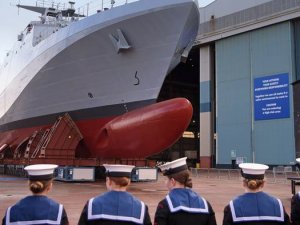 The third of five new River class offshore patrol vessels being built for the U.K. Royal Navy, HMS Trent, was officially named during a ceremony at the BAE Systems shipyard in Glasgow on Tuesday.

“This is another landmark moment for the River class offshore patrol vessel program and an important day that honors the traditions of the Royal Navy,” said Iain Stevenson, Managing Director of BAE Systems Naval Ships. “Today is made even more special as we are able to see the full scale of Trent as she prepares to enter the water for the very first time in the next few days. This is yet another reminder of the importance of what we do.”

After the naming ceremony, the 90-meter warship will be loaded onto an awaiting barge which will then lower her into the water before her outfitting and systems installation. Trent is expected to be delivered to the Royal Navy in the second half of 2018.

The sixth Royal Navy vessel to bear the name, HMS Trent will be armed with a medium-caliber gun and a flight deck capable of accommodating a Merlin helicopter.

As part of the official naming ceremony, employees and guests watched as Pamela Potts, Trent’s sponsor and wife of Vice Admiral Duncan Potts, released a bottle of gin from the Nelson's Gin Distillery & Gin School in Stafford against the ship’s hull to officially name the vessel.

“As the third of five offshore patrol vessels being built in Scotland, HMS Trent will soon be part of a fleet of highly capable ships. These new vessels will keep the U.K. safe by conducting counter-terrorism, anti-piracy, anti-smuggling and other vital maritime operations,” said Defense Minister, Guto Bebb MP.

“U.K. Defense has invested in an unprecedented shipbuilding production line in Glasgow and the city’s shipyards with their 1,700 highly skilled engineers and technicians are benefiting from full order books for the next two decades,” Bebb added.

Medway, the second vessel in the River class, was named in October 2017, and is set to depart for sea trials in the first half of this year. The fourth ship, Tamar, is now structurally complete while the final River Class OPV, Spey, is under construction at BAE Systems’ Govan yard.