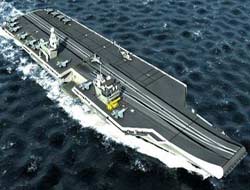 In the House of Commons Des Browne, Secretary of State for Defence, announced confirmation that orders would be placed for two new aircraft carriers.

In the House of Commons Des Browne, Secretary of State for Defence, announced confirmation that orders would be placed for two new aircraft carriers. The ships will have a displacement of 65,000 tons and will be named, as previously announced, HMS QUEEN ELIZABETH and HMS PRINCE OF WALES with delivery dates to be in 2014 and 2016 respectively - some two years later than had been originally expected.

Liam Fox for the Conservatives welcomed the announcement although he remarked that the ships had been in planning for twice as long WW2 lasted and he voiced concerns that the Royal Navy had suffered a high price in terms of having to reduce their destroyer fleet to fund the new aircraft carriers.

He also quizzed the government on where the ships were to be based, saying that the two English naval bases were not adequate. Given the sheer size of the vessels, the biggest ever built for the Royal Navy, current dockyards would need to be upgraded.

Mr Browne refused to be drawn on his questions and said that announcements on finer details would be made 'at the appropriate time'.

When asked what roles Rosyth, Clyde, Barrow and Portsmouth would play during construction the minister responded that 10,000 jobs would be created and that 5000 jobs at the four shipbuilding centres would be sustained. But he said that details were still to be forthcoming. He did however say that 1100 jobs at Barrow would depend on the work, and that people could draw conclusions from this.

Des Browne also said that he could not give details about discussions with the French, who wish to build to this design too. He said he was unable to give further details at this stage but in his statement he had already said that much collaboration had been taking place with France on the project.

John Robertson who's constituency includes Scotstoun, asked what was happening to Type 45 destroyers 7 and 8. The minister responded that challenges existed with the cost of the destroyers and that announcements would be made in due course.

John Reid, the former Armed Forces Minister praised the announcement and said that it would provide security for shipyards on the Clyde.

It was also announced that all three naval bases in the UK would be retained but that efficiencies would be sought and would result in job losses.

The following details of the ships are courtesy of BAE System's website:

The future Aircraft Carriers for the Royal Navy, HMS Queen Elizabeth and HMS Prince of Wales, will be the largest and most powerful surface warships ever built in the UK. They will displace approximately 65,000 tonnes, a size between the USA's 100,000 tonne Nimitz class and the French 43,000 tonne Charles de Gaulle class aircraft carriers, and three times larger than the Invincible class carriers.

The carrier will have a maximum speed of 25 knots. At 15 knots the range will be 10,000 nautical miles and the ship carries food, fuel and stores for an endurance of seven days between replenishments. Each ship will have a complement of typically 1,200, including 600 aircrew.

FAC will be the principal platform for the RN/RAF Future Joint Combat Aircraft (FJCA) which will replace RN and RAF Harriers; the FJCA role will be filled by the STOVL (short take off vertical landing) variant of the Lockheed Martin F35 Joint Strike Fighter (JSF).

In order to maximise the flexibility that CVF can offer over its potential 50 year service life, the carriers will be built to an innovative adaptable design. Although CV-based, the ships will initially be fitted with a ramp for STOVL operations. Post JSF, the design will be capable of modification to operate aircraft requiring a catapult launch and arrested recovery. Although the final dimensions of CVF have yet to be confirmed, initial indications suggest that the carriers could be the largest warships ever built for the Royal Navy. The base port will be Portsmouth, Hampshire.

BAE Systems is a member of the Carrier Alliance and play a leading role in delivering this programme.

This news is a total 467 time has been read