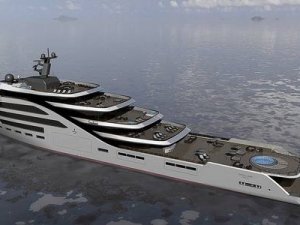 Norway’s Ulstein Verft, which has been actively looking to diversify its portfolio due to the offshore downturn, has clinched a $100m deal to build a private yacht for a shipowner.

Managing director Kristian Saetre confirms the contract, which is the first of its kind for the yard. He will not name the client, who is said to be one of the world’s biggest shipowners.

Herbjorn Hansson, John Fredriksen and Eyal Ofer are among the names mentioned as potential buyers of the vessel. But their representatives deny any involvement. Fredriksen told TradeWinds: “It isn’t me. I cannot afford it.”

Ulstein Design & Solutions has developed the marine platform and hull lines of the vessel, with Monaco-based Norwegian yacht designer Espen Oeino responsible for exterior design and the general arrangement plan.

The yacht is slated for delivery during the first quarter of 2018. It will be 88 metres long by 16 metres wide and will feature Ulstein’s trademark X-bow developed for offshore-support vessels. Saetre did not disclose its gross tonnage.

Oeino has earlier told the press that he never identifies his clients nor discloses figures for the projects he works on.

“This is a very important contract for us in a new and interesting market,” said Ulstein Group chief executive Gunvor Ulstein. “The project will keep a significant part of the Ulstein Verft workforce occupied throughout 2017.”

Work on the project has already begun.

In October, the yard won a conversion contract to upgrade the Adventurers Partner-owned, 4,376-gt cruiseship Sea Adventurer (built 1975), which is operated by Quark Expeditions.

It will be fitted with new main engines, gearboxes and drive systems, re-bladed propellers, plus additional passenger accommodation and extensive interior refurbishment.

The work is expected to be completed in mid-June next year in time for the summer season.

Ulstein is marketing its own state-of-the-art cruiseship design also featuring its characteristic X-bow and suitable for polar waters.

It is slated for launch in December with sea trials thereafter.

Its sister, the Windea La Cour, was delivered to Siemens in August and is on station serving the Netherlands’ Gemini wind farm.

This news is a total 3141 time has been read
Tags: Ulstein lands yacht order from a mystery shipowner