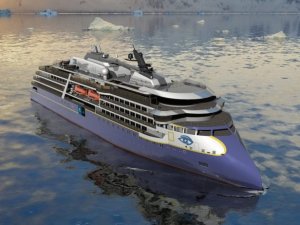 U.S.-based Lindblad Expeditions has signed an agreement with Norwegian shipbuilder Ulstein to build what Ulstein describes as the world’s foremost expedition cruise ship.

The new vessel will be built in Ulsteinvik, Norway and is scheduled for delivery in the first quarter of 2020. The agreement comes with an option for two additional ships to be delivered in subsequent years.

Ulstein says the state-of-the-art polar expedition vessel has been designed as “the ultimate expedition platform with a focus on safety and comfort”, and the design will incorporate solutions to reduce its environmental impact. A key feature will be Ulstein’s patented X-BOW, a distinctive bow that provides both fuel efficiency and improved motion in rough seas. The ship will also include expanded fuel and water tanks for extended operations in remote areas and zero-speed stabilizers for stability underway, or while stopped for wildlife observation or embarking/disembarking. The vessel will also be built to a “very high ice class”, according to Ulstein.

“We are incredibly excited to be working with Ulstein and their brilliant team of engineers and designers on this state-of-the-art vessel as we continue expansion of our fleet. It is the next step in the long-term growth of the company, and will be the most extraordinary global expedition ship in the world on a multitude of levels,” said Sven Lindblad, President and CEO of Lindblad.

In keeping with the Lindblad Expeditions-National Geographic ethos, the ship will be designed to access the outside environment from anywhere on the ship. It will have 69 guest cabins and suites, 75% of which will have exterior balconies. The ship will also feature a Zodiac loading system which will allow guests to get ashore quickly and safely, as well as kayaks, cross-country skis, a remotely operated vehicle (ROV), hydrophones, underwater video cameras, and a helicopter landing platform, among other features still to be announced.

“Our expedition cruises, operated through our alliance with Lindblad Expeditions, have delivered remarkable experiences to our guests for the past 13 years,” said Nancy Schumacher, head of Travel and Tour Operations for National Geographic. “The expansion of the Lindblad-National Geographic fleet is truly terrific news, as it allows us to offer these unforgettable trips to even more travellers in the future. We look forward to joining our partner Lindblad Expeditions in celebrating the launch of the latest addition to the Lindblad-National Geographic fleet.”

This news is a total 595 time has been read
Tags: Ulstein to Build New National Geographic Polar Expedition Cruise Ship