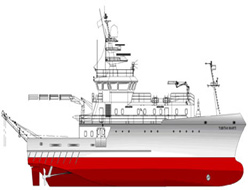 Norway's Ulstein Group continues to expand. This week it announced that it has entered into an agreement to acquire Maritime and Mechanical Technology (MMT), an engineering company that is based in Norway but which owns engineering companies in Croatia and has engineering-oriented partnerships in India.

Meantime, Ulstein Es-Cad, established in December last year by the Ulstein Group and Turkish ship design company Es-Cad, has just landed a significant design contract from the Scientific and Technological Research Council of Turkey (TUBITAK) for the design of a new oceanographic research vessel.

And in October, Ulstein announced a letter of intent that will see it take a majority stake in Netherlands based Sea of Solutions. That deal is due to complete in January and will give Ulstein a broader portfolio in the heavy offshore sector.

The latest acquisition, MMT, employs approximately 20 people and has extensive experience of coordinating Norwegian and foreign engineering groups. It was set up in 2006 by Harald Bigse, who will now join the Ulstein Group.

"To be able to increase volume in existing and new market segments, the sale of design and package solutions is an important area for the group. And a vital factor in realising this is more and competent resources on the engineering side. MMT's experience with building and leading international engineering networks will therefore complement our growth strategy extremely well," says Tore Ulstein.

The Ulstein Group intends to establish Ulstein Engineering which, says Tore Ulstein, will "create an attractive and flexible engineering operation." It will integrate the international engineering functions in the group with newly acquired companies and any future acquisitions.

Harald Bigset will be manager of the new company.

Ulstein Verft will retain its engineering resources after the establishment of Ulstein Engineering.

The new vessel being designed by Ulstein Es-Cad will serve as a versatile platform for oceanographic research, including hydrography and biological, geological and geophysical research.

In line with the requirements of TUBITAK, Ulstein Es-Cad has developed the vessel with an overall length of 41.2 m, a beam of 9.6 m and a design speed of 16 knots.

The vessel may be compact, but it will be equipped for sustained operations, with a cruising range of 2,700 nautical miles at 14 knots and accommodation for 14 scientific personnel in addition to a permanent crew of 12.

The vessel is arranged with four laboratories, meeting facilities and a 100 sq.m working deck equipped with full crane coverage, twin winches, an aft A-frame and arrangements for ROV operations.

"The Turkish Government is giving emphasis to enhancing the capabilities for oceanographic and geological research, both from an environmental- and resource management perspective, as well as in consideration of large population centres being located in seismologically active areas. We believe the current contract would serve to position Ulstein as a relevant partner also for larger projects that are planned," says Engin Sezen, general manager of Ulstein Es-Cad.

TUBITAK is the leading agency for managing, funding and conducting research in Turkey, with more than 1,500 researchers engaged in basic research and applied research, independently and in public-private partnership. The agency reports to the Prime Minister and is a principal advisor to the Turkish Government on science and research issues.