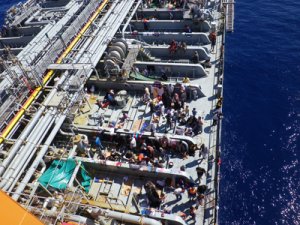 IMO said that behind the statistics of those rescued or lost at sea are individual stories of human tragedy and human rights violations throughout the migration process.

The International Maritime Organization (IMO) has together with other UN agencies called for concerted action from the international community to address the issue of loss of life, injury, trauma and serious human rights violations affecting migrants, asylum-seekers and refugees traveling by sea.

They also voiced the need for addressing the drivers of dangerous sea journeys, as well as ensuring that responses by States upon arrival and disembarkation uphold human rights and dignity, and address specific needs for protection of migrants, asylum-seekers and refugees.

“Such cooperation is also critical to identifying, prosecuting and punishing the criminal gangs who are responsible for human rights abuses and for arranging sea transportation in breach of all safety regulations,” the statement said.
IMO said that behind the statistics of those rescued or lost at sea are individual stories of human tragedy and human rights violations throughout the migration process.

The joint statement was issued following a Plenary Panel on “Boat People in the Twenty-First Century”, which took place on 10 December during the seventh High Commissioner’s Dialogue on Protection Challenges (10-11 December 2014, Geneva, Switzerland), under the theme of “Protection at Sea”.

The statement stressed that the people undertaking these journeys were not criminals, but that those who exploit their need for protection or hope for a better future, putting lives at risk and violating human rights for profit, were acting illegally.

Speaking during the plenary panel in Geneva, IMO Secretary-General Koji Sekimizu acknowledged that the size and scale of situation in the Mediterranean Sea was becoming unmanageable, with 160,000 people rescued during 2014 by navies, coast guards and merchant vessels.

Mr. Sekimizu commended the actions of the rescuers, including the international shipping industry which had responded to the situation with the issuing of guidance, produced by the International Chamber of Shipping (ICS), on large scale rescue operations at sea.

Migrant smugglers relied on the long-standing maritime tradition enshrined in the International Convention for the Safety of Life at Sea (SOLAS) of rescuing people in distress at sea. Merchant ships would continue to uphold this tradition, but there was a need for prompt and predictable disembarkation procedures, he said.

“Imagine a crew of a merchant vessel of 20 absorbing 500 people. Simply how to feed them…this is an immense problem,” Mr. Sekimizu said.
In considering solutions, Mr. Sekimizu highlighted the need to prevent people-smuggling, including the establishment of a database of the vessels involved in sea migration and the people behind them; and to consider alternatives, including regulated sea passage.

This news is a total 1549 time has been read
Tags: The International Maritime Organization (IMO), sea, the issue of loss of life, injury, trauma