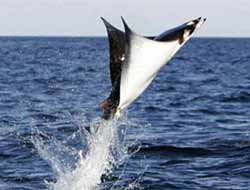 A woman who died after she was hit by a spotted eagle ray leaping from the water off the Florida Keys, the USA, suffered "multiple skull fractures and direct brain injury".

A woman who died after she was hit by a spotted eagle ray leaping from the water off the Florida Keys, the USA, suffered "multiple skull fractures and direct brain injury".

A boater who was killed when a ray jumped out of the water in the Florida Keys and hit her face died of skull fractures and brain injuries, not from the animal's poisonous barb, a medical examiner said Friday.

A 34-kg stingray killed a Michigan woman Thursday when it flew out of the water and struck her face as she rode a boat in the Florida Keys, officials said.

Judy Kay Zagorski, of Pigeon, Mich., was sitting in the front seat of a boat going 25 mph when the spotted eagle ray, with a wingspan of 2 meters, leaped out of the water, said Jorge Pino, spokesman for the Florida Fish and Wildlife Conservation Commission.

The 57-year-old woman"s father was driving the boat on the Atlantic Ocean side of Vaca Key, Pino said. ?He had absolutely no warning. It just happened instantaneously,? Pino said. The collision knocked Zagorski backward onto the floor of the boat, Pino said.

The impact likely killed the woman, and she did not appear to have puncture wounds from the ray"s barb, Pino said. An autopsy is planned, Pino said. Zagorski"s sister was standing next to her when the stingray appeared but was not injured, Pino said.

The stingray died from the impact, officials said. 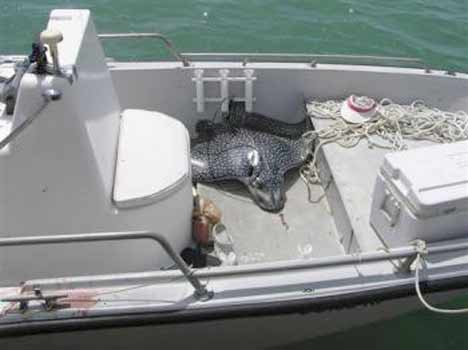 A spotted eagle ray is seen in this photo released by the Monroe County Sheriff's Dept. Thursday, March 20, 2008.

Spotted eagle rays can weigh 227 kilograms and have a wingspan of up to 3 meters. They are known to occasionally jump out of the water but are not aggressive and use the venomous barb at the end of their tail for defense.

The rays are protected in Florida waters and are typically seen swimming on the water"s surface.

?Rays jump to escape a predator, give birth and shake off parasites,? said Lynn Gear, supervisor of fishes and reptiles at Theater of the Sea in Islamorada. ?They do not attack people.?

In 2006, a South Florida man was also critically injured when a stingray flopped into his boat and stung him. James Bertakis, 82, of Lighthouse Point, underwent surgery because the stingray left a foot-long barb in his heart. He has since recovered.

Crocodile Hunter" Steve Irwin was killed in 2006 when a stingray's barb pierced his heart off Australia's Great Barrier Reef. 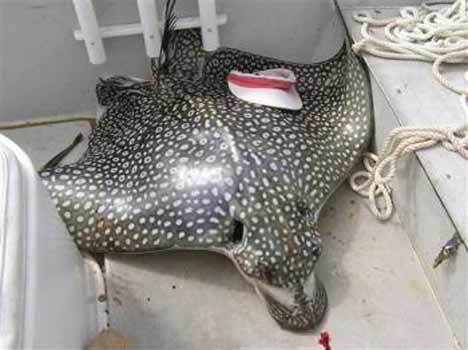 This news is a total 1470 time has been read