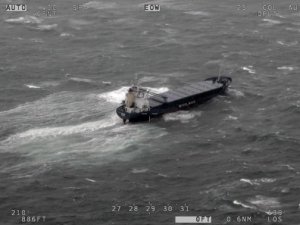 “Approximately 180 tonnes of cargo have been offloaded and are being transferred ashore. Safe off-loading from MV Kaami is heavily dependent on weather and sea conditions, and this morning’s operations were conducted between high and low water.”

On 8 April, salvors safely boarded MV Kaami and were able to successfully open two of the vessel’s hatch covers allowing access to the cargo.

However, due to the weather and sea conditions over the past few days, a swell had built up and it was not possible to safely bring a vessel alongside the MV Kaami for a period long enough to begin offloading cargo until today.

The salvage is overseen by the Secretary of State’s Representative for Maritime Salvage and Intervention supported by the MCA, salvors, the ship’s insurers and the Scottish Environment Group.

According to HM Coastguard, its fixed wing aircraft will carry out further flights during cargo removal operations to monitor for pollution.

A temporary exclusion zone of 500 metres remains in place around MV Kaami to all but those vessels directly involved in supporting the response.

The Maritime Accident Investigation Branch (MAIB) is carrying out an investigation remotely with assistance from the salvors.

The 4,300 dwt cargo ship ran aground off the Isle of Skye, Scotland, on March 23. The open-hatch singledecker was carrying a cargo of pelletized refuse-derived fuel at the time of the incident.

Built in 1994, Kaami is owned by Norway’s Misje Rederi and flies the flag of the Bahamas, VesselsValue’s data shows.