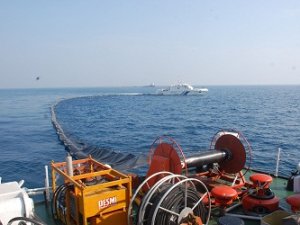 India has deployed its Coast Guard teams to respond to and monitor an oil spill which occurred after a liquefied petroleum gas (LPG) carrier BW Maple and the oil tanker Dawn Kanchipuram collided near Ennore’s Kamarajar Port.

The oil tanker, which was carrying 32,813 tonnes of petroleum, oils and lubricants, suffered a rupture which led to engine oil spill in the early morning hours on January 28.

Kamarajar Port authorities deployed oil boom around the vessel after bringing it to a safe location to contain seepage, however, no further seepage was discovered.

The situation was closely monitored by port officials from the time of accident and the required assistance was rendered to both vessels, according to the Indian Ministry of Shipping.

Due to the amount of the tanker’s cargo, the authorities decided to berth the ship and discharge its cargo to prevent any environmental damage.

Additionally, the coast guard deployed their ships and helicopters to survey and keep a watch on the oil spill. As soon as the oil leak was tracked, the coast guard started mobilizing equipment and manpower for clean-up at various locations and coordinated these operations.

The government informed that the entire clean up operation could be completed in a couple of days.

This news is a total 992 time has been read
Tags: Update: Oil Spills from Ruptured Tanker