Update: ONE Apus heading toward Kobe as lost units are revised to 1,816 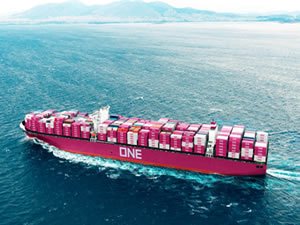 The revised estimate of lost containers from the Japanese-flagged containership ONE Apus now stands at 1,816 units, scaled down from the initial estimates which exceeded 1,900 containers.

Some 64 containers of those damaged or lost are believed to contain dangerous cargo, up from 40 which had been previously reported by Ocean Network Express (ONE), the charterer of the ship.

The staggering figure of affected containers makes the incident one of the worst cases of container losses not involving groundings, collisions, or sinking of vessels.

To remind, the boxship, deployed on ONE’s Far East Pacific 2 (FP2) Service, lost a number of containers on November 30 due to severe weather conditions while the vessel was transiting the Pacific Ocean.

The ship was en route from Yantian, China to Long Beach, USA when it encountered gale-force winds and large swells around 1,600 nautical miles northwest of Hawaii.

The severe weather conditions caused the vessel to roll heavily resulting in a yet-to-be-determined number of containers to dislodge and fall into the ocean.

Based on an early investigation onboard the ONE Apus, the impacted container bays remain unsafe for close-quarter inspections. Meanwhile from visual inspection, it is expected that the containers in the cargo hold are intact.

Images have emerged on social media of what has been described as pictures of ONE Apus from the ship’s crew members, showing tumbled containers on board.

Meanwhile, the 14,052 TEU containership, built in 2019, is proceeding to the port of Kobe, Japan with an estimated time of arrival on December 8.

“The priority remains on getting the vessel and crew safely to port. Once berthed, it is expected to take some time to offload the dislodged containers that remain on board. Then a thorough assessment will be made on the exact number and type of containers that have been lost or damaged,” Ocean Network Express said in an update.

The Japanese liner major said that once the ONE Apus is in port and deemed safe, a full investigation will be conducted into this incident in conjunction with the Flag State and the relevant maritime authorities.

Initial market estimates indicate that the insurance bill for the lost containers could reach around $ 50 million.

There are over 6,000 containerships continuously operating on the world’s seas and waterways shipping vital supplies to communities around the globe, data from the World Shipping Council (WSC) shows.

Proper packing of the cargo into the container, correct container weight declaration, and proper stowage and securing aboard ship are key in making sure the safety of containers transported across the world. However, a number of factors ranging from severe weather and rough seas to ship groundings, structural failures, and collisions can result in containers being lost at sea.

Containers lost overboard represent less than one thousandth of 1% of the roughly 226 million containers currently shipped each year, the council said.

WSC’s data indicates that there were on average a total of 1,382 containers lost at sea each year in the past twelve-year period (2008-2019).

This news is a total 2528 time has been read
Tags: Ocean Network Express , ONE Apus , World Shipping Council